Have a tour through my one person show from last October, 2009. Figurative paintings, wearable art garments and circus costumes, painted floor cloths, mosaic sculpture and a general riot of color!

A blaze of pink, a strident aquamarine, wildly clashing purples and reds: the artistic journey of Paula O’Brien is strewn with colour.

Her latest show, now appearing at the Sunshine Coast Arts Centre’s Doris Crowston Gallery in Sechelt, charts a path through several incarnations of the Gibsons artist — from costume design through photography and the most recent work, painting.

A portrait painter? A wearable art designer? O’Brien, who has also been known by the artist’s name of Pavelka, doesn’t pigeonhole easily, which is perhaps why she selected a glorious, broad theme for her show, After the Circus. 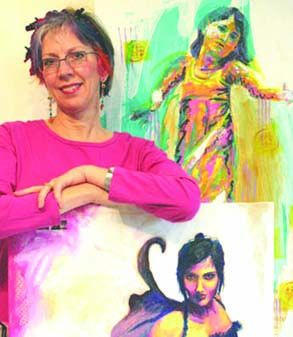 Jan DeGrass Photo
Works by Paula O’Brien show at the Arts Centre in Sechelt until Nov. 22, 2009

The Circus Pavelka starts when the curtains open on two acrobats, one contorted on a tightrope, the other poised for performance. Dream Big, Work Hard is the title of the first one, a 2004 painting, and it somehow fits the mood. A giant floor cloth employing shades of shocking pink hangs on one wall with examples of the multi-layered outfits that O’Brien has designed. Her training involved fine arts at John Abbott College in her home town of Montreal, and she has studied the artistic aspects of embroidery/textiles at Goldsmiths College in London. But her interest in painting languished while she raised a family, sailed to Mexico for two years and started up a business, Kidzsmart, with her husband.

The multi-media work, Balance, from 2003, an acrylic on canvas with a textile figure, seems to mark a transition from fabric to other mediums. But it was a life drawing class in 2007 that really shook her up.

“It was a thunderbolt,” she said. “Like having new glasses.”

People became her primary focus — not just ordinary folks, but beautiful people or performers in costumes.

“I’m capturing light on the body, rather than the form of the body, and using different colours to represent different parts. It’s a language of colour,” she said.

The series of Riley sketches shows movement, an attractive young woman dancing perhaps. A row of Little Sirens, depicting a girl in rouge and tiaras, puts one in mind of circus children from another age. In reality, the eight-year-old was a dancer busking with her family on Granville Island. O’Brien set up a photo shoot and realized she was watching the young star transform into a beauty in front of her eyes.

Her signature piece is also a portrait. From First Steps to Red Sequins depicts a sultry woman, rendered in acrylic and coloured pencil, posed in the wings in those few moments before going on stage. Once again the subject was drawn from a photo that O’Brien took while performers rehearsed Circle of the Wheel, a dance residency at the Heritage Playhouse a few years ago.

Try not to miss O’Brien’s delightful photos tucked away in the gallery’s alcove. They capture children in laser colour prints on bamboo paper. The variety of PhotoShop™ techniques, such as sepia and soft focus, can be distracting, but if you look closely, you’ll see the faces are caught at the exact moment of self doubt or longing. Imagine is particularly lovely — two little girls playing dress up and dreaming.

“Originally I took my photos for art reference, but in fact I’m becoming a better photographer because of it,” she said.

O’Brien, who is bursting with enthusiasm for her art passion, has also embarked on another project: a directory of Coast artists. She’s already organized a networking night for women artists in an effort to help newcomers meet and talk about their work. The success of the idea led to her on-line directory. Although aware of similar resources such as the Coast Cultural Alliance’s directory, she notes that any such list of artists need images and information in order for artists to connect. The directory started as a page on her own website: www.paulaobrien.com but now has a life of its own as www.sunshinecoastartists.org. It’s free for Coast artists to join, and the more the better.