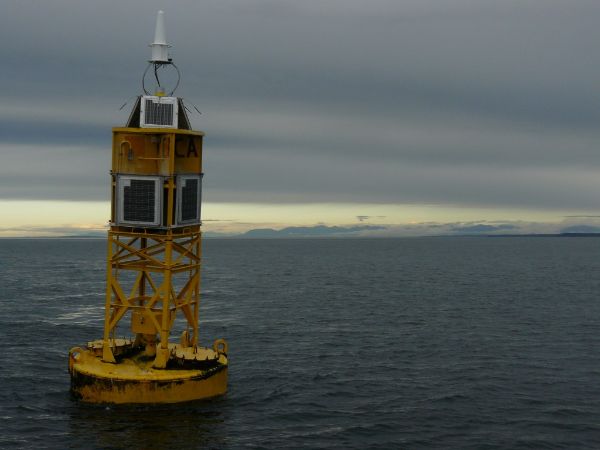 Our week long trip south by boat in September was such a treat. This summer, we just weren’t able to get out on the water as much as we had hoped so having that lovely week down to Whidbey Island was sweet. We cast off from Bellingham at 7 am and started our long trip home under big cloudy gray skies. Travelling along at 8-10 miles per hour, we see some great sites sometimes. 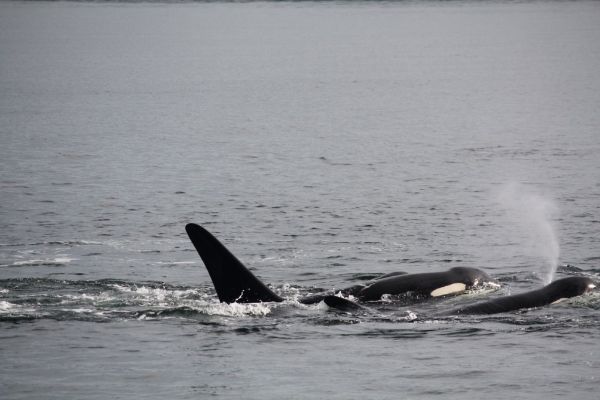 Around 11:00, Dennis was just coming up into the steering station and we both were fortunate enough to both be looking out our side door at exactly the same time as 2 whales surfaced just beyond us. Holy cow! How lucky was that! We immediately put the boat into neutral and just bobbed around for about 20 minutes. The sound of them breathing all around us is what hit us first rather than the sight as the pod of killer whales was farther away than they were when I took these photos coming back from the same September Rendezvous in 2008. 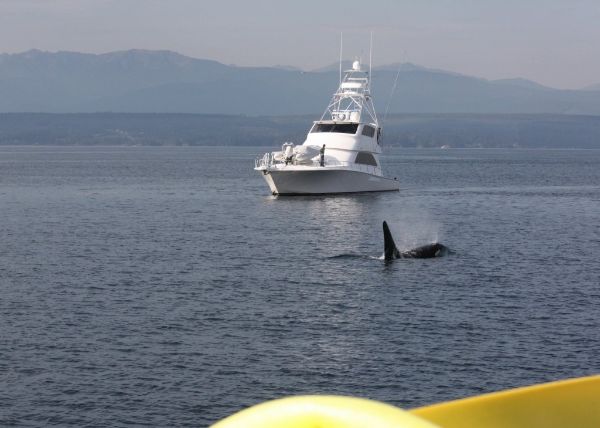 That time, we were completely surrounded by them for about 40 minutes before we eventually had to turn the motor back on and slowly chug away. I’ve been boating in these waters since we moved to British Columbia in 1989 and I’ve really only seen them up close and personal twice. 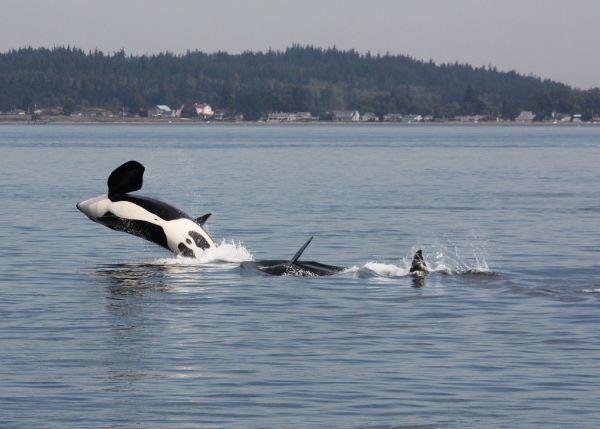 My husband has seen them way more than that including one sailing race when the whole fleet sailed right through a whole pod. One moment there’s nothing and suddenly the next moment, you’re surrounded by them. Now, THAT is an example of what AWESOME really means. 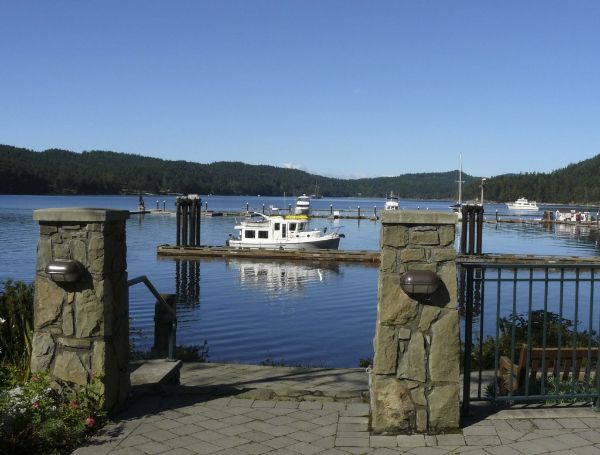 Once we telephone in our Nexus clearance to Canada after crossing the border, we were obliged to be at the Custom’s dock in Poet’s Cove on Pender Island by 1 pm. Even with the whale watching, we still made it in good time. It’s kind of ridiculous for Customs to insist that you appear at a specific place at a specific time when traveling by boat because it just is not the same as traveling by car, and even by car there can be unforeseen delays. Anyway, we chugged into Poet’s Cove bang on time and tied up under the warmest sunniest big blue skies a BC September 28 could deliver. That’s a long haul, from 7am to 1pm so we treated ourselves to a relaxing 2 hour stop to walk the dog and have some lunch out on the sunny deck of the fairly swanky resort there. It used to be a very cute homey little family run resort with a kids club room and a sweet swimming pool for visiting boaters. The pool is still there but the whole place has been rebuilt into something quite grand. 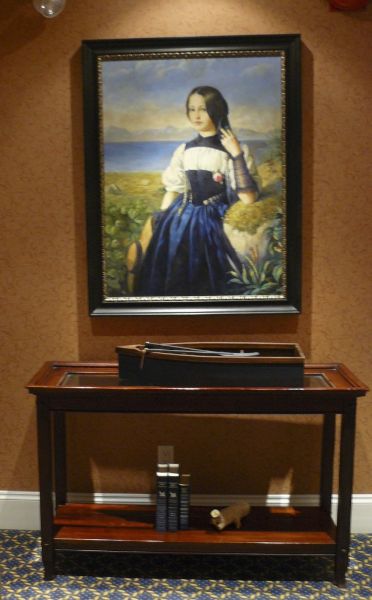 When I saw this painting down near some washroom, it made me realize that figurative art is really not seen nearly as much in public places as say, flowers or landscapes or abstract art. Is it really so hard for North Americans to have figurative art in their hotels, workplaces and homes? I’d love some feedback from you guys and gals on the figurative artist site. Is moving figure-based art really as hard as I hear? 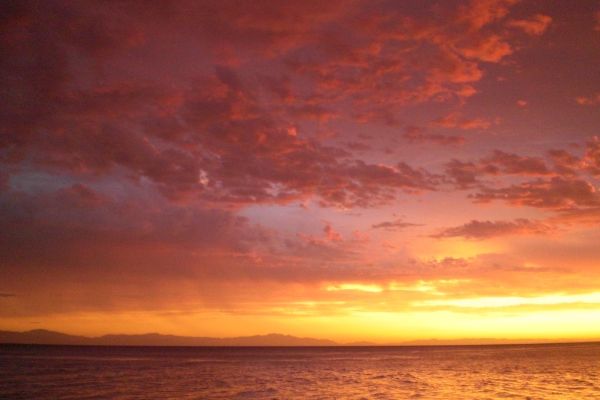 At 3pm, we finally cast off and chugged the rest of the way home. The crossing from Porlier Pass to Gibsons was 2 hours of hard slogging, very bumpy ride. We don’t get seasick but with the constant motion, it’s kind of like riding a horse for hours on end as the body is constantly in motion keeping itself vertical. We pulled into our home berth at 7pm happy to be home. Next year, we‘ll break this coming north day up and spend the night at a sweet little anchorage. Why do such a long day’s slog when we can break it up? Will try to plan in a couple of extra days next year. 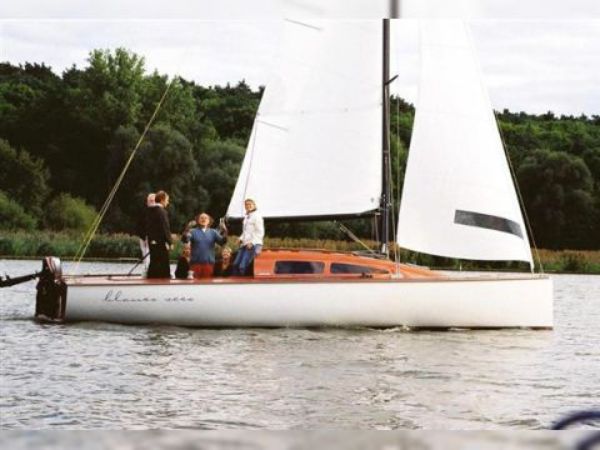 I hope you’ve enjoyed my little account of our boating trip. I’ve been boating since before I was born. My mom decided that June that since she was overdue, she may as well get one last sail in before I popped out and had a grand day of sailing the day before I was born. I learned to walk on the tiny galley counter in a 27 foot steel Jollenkreuzer sailboat (something like this one above) and remember very well when I was the only one in my family short enough to stand up down below as it only had sitting headroom. There’s only been 12 years of my life when there wasn’t a boat of some kind tied to my family so I guess it’s in the blood. And now, back to the real world where I’m a lot less semi-retired than I was last year.
Published on: Oct 9, 2010