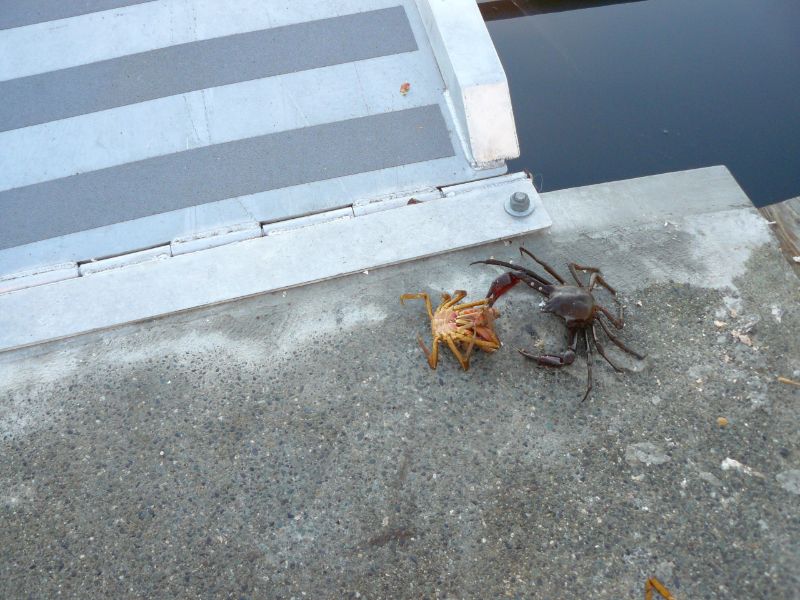 Depart Sydney, our last morning
Well, as much as we were looking forward to a good discussion with the marina about its lack of info at the front gate, we were up and away from Port Sydney before 7:45 am on a crisp bright clear October 2 morning with the full moon smiling down on us as well. The docks were littered with crunching shells underfoot and even these 2 nice looking crabs were just left here on the dock by the seagulls. How odd. Our night was completely tranquil with absolutely zero wind so the forecast just did not deliver the punch forecast thank goodness. 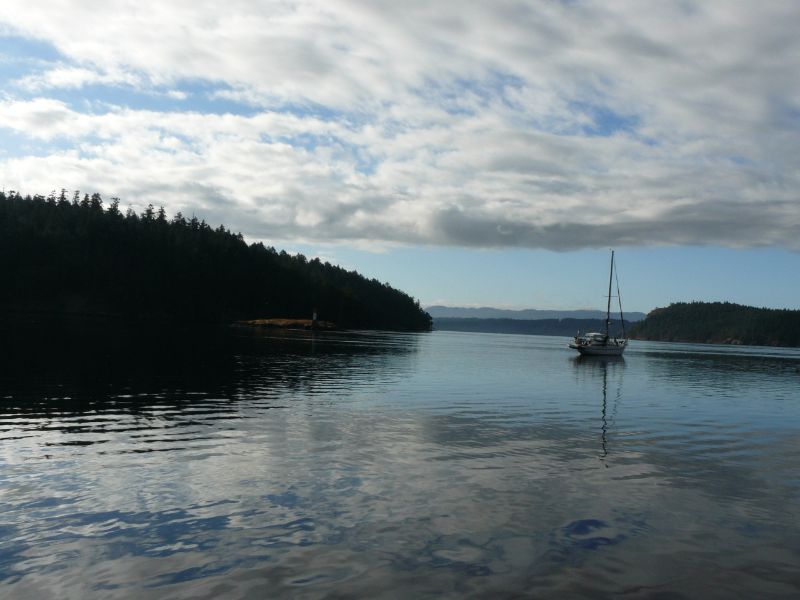 By 8:40 the winds were getting up a bit but very smooth cruising through the lovely Sasnum Narrows, such a pretty stretch of waters between Salt Spring island and maple Bay and other nice small coastal communities. By 10:30 the chop was about 2-3 feet and winds were getting up to 20-28 knots. Decided to aim for Silva Bay on the south end of Gabriola Island and wait it our a few hours and then check in with conditions around dinner time. 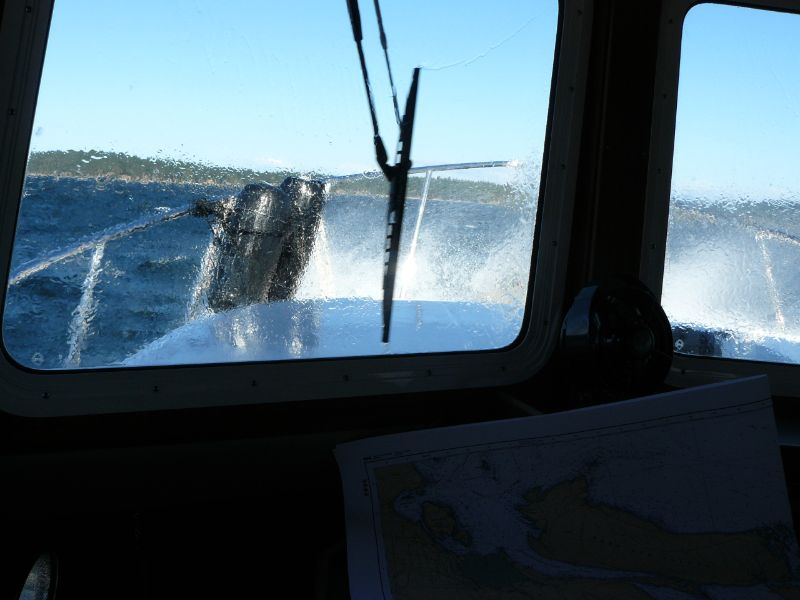 While we went along, I put some good time into sorting through my photos on my computer and copying a whole bunch into a folder for studio inspiration. These are the images I want to surround myself with when I get back to painting which will be any day now. They have been simmering and cooking gently in my mind for some time and I feel like a good day’s work has been done in the studio today just getting this bunch corralled into one folder to work with. 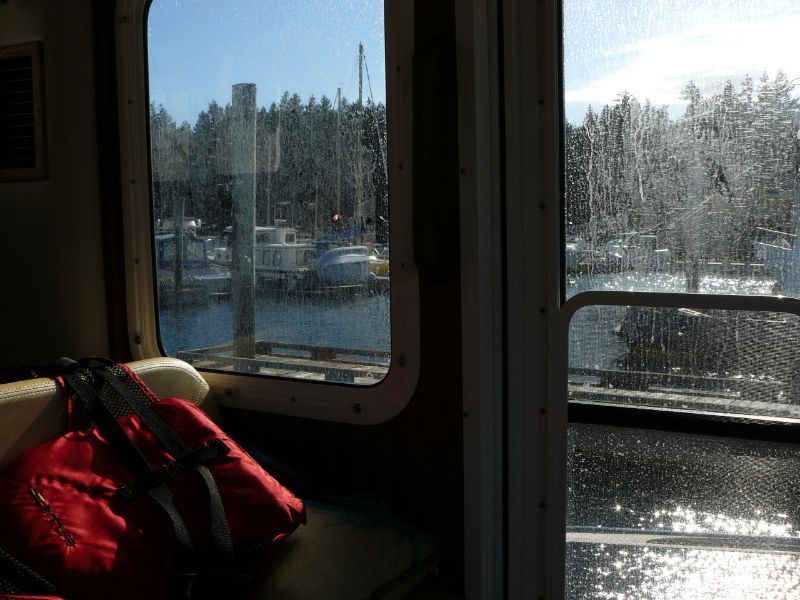 We hauled into an empty slip in Silva Bay at 1310 and just hunkered down while the winds blew. We’re covered in salt but due to water shortages there’s no boat washing anywhere. Took a little walk up the road to get the blood flowing and check out Silva Bay in early October. 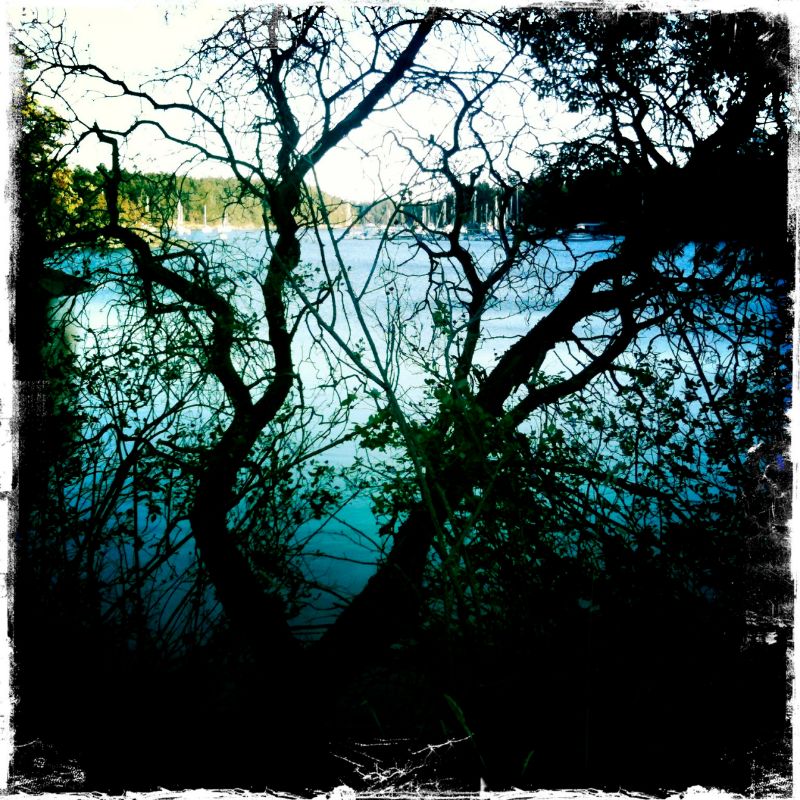 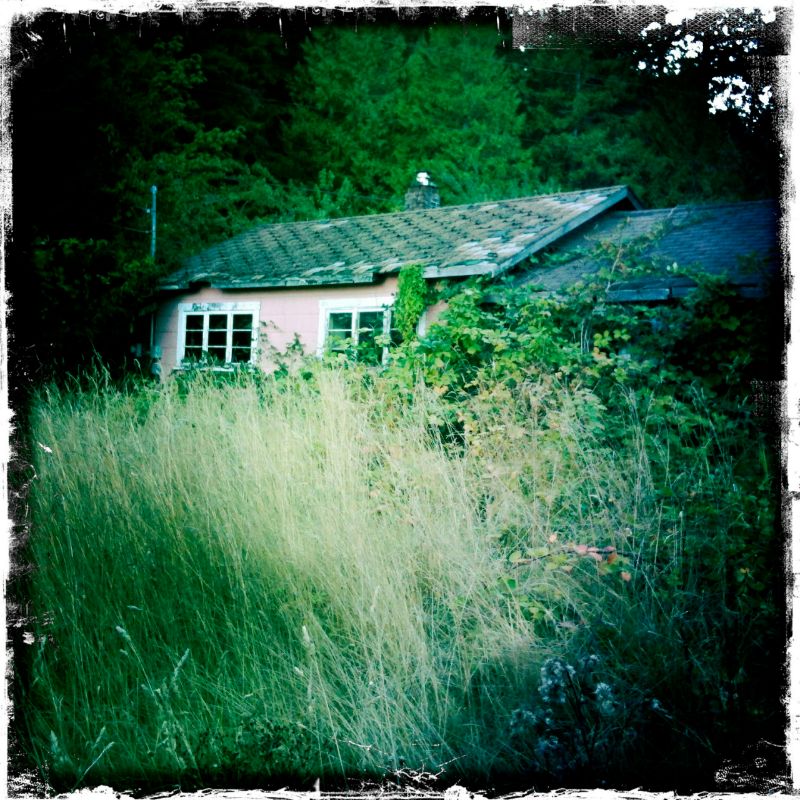 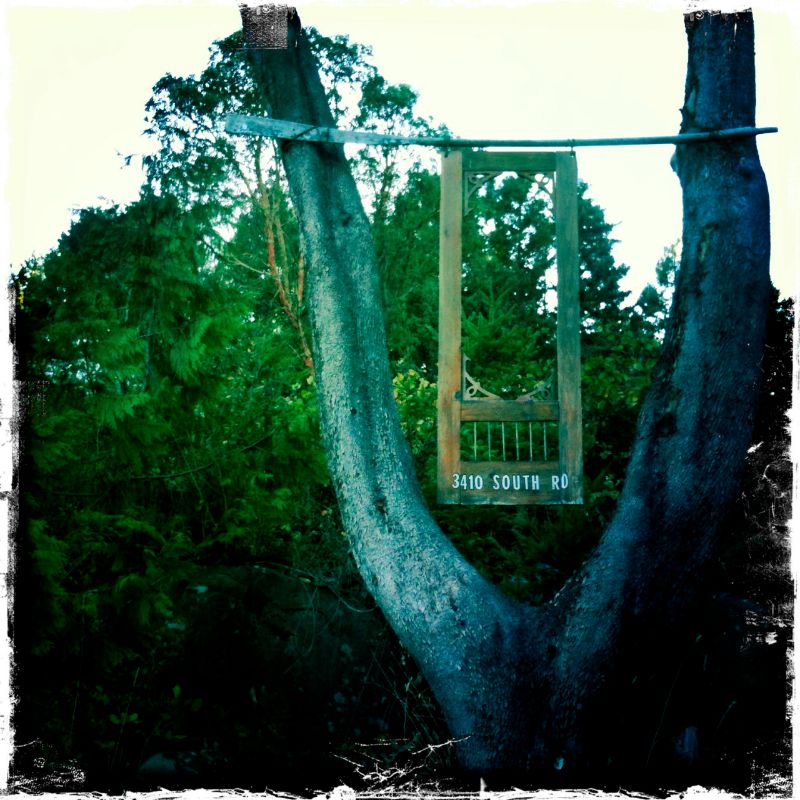 There are still some nice juicy blackberries to be had and plump red apples to pick but things are generally closed (Monday and Tuesday anyways) and Fall is settling in. There was no water or electricity at the dock due to a power outage so the salt stayed encrusting our windows and deck when we usually would have given them a quick hose down upon arrival.

We listened hard to the weather channel on VHF radio and finally decided at 7 pm not to depart tonight. Silva Bay to Gibsons at our speed of about 8 miles per hour is about 2-plus hours. With potentially high winds, lumpy seas and just the full moon to show us logs in the water, it would have been an anxious trip. When you are really blue water cruising, of course you do go all day and all night but around here, it’s just not necessary. 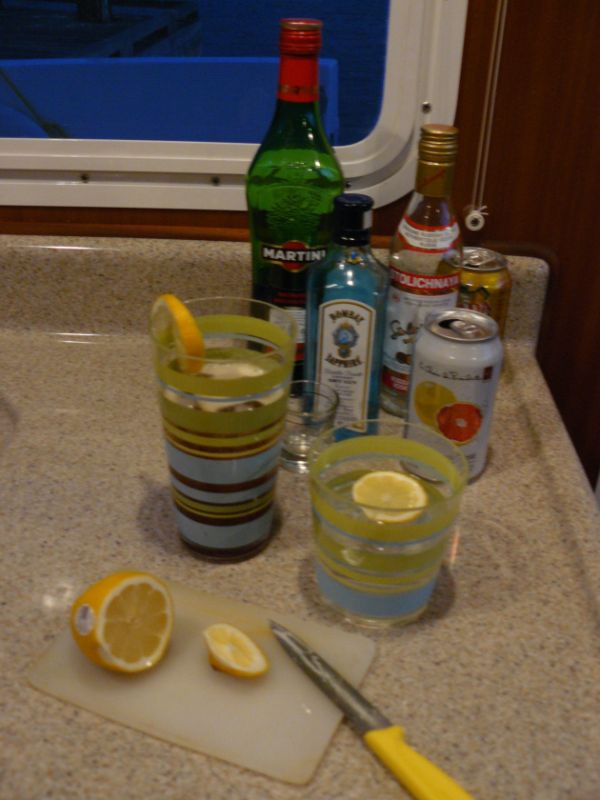 Okay! We opened the bar and enjoyed a nice cocktail, something that we would not have been doing underway. I’d already made our dinner ahead so we phoned home from a pay phone to let them know we would not be leaving tonight. For some reason Silva Bay is a black hole for cell phone, always has been. Mmm, Heinz baked beans and sautéed veg and crackers. This is pretty much what we are down to, our canned reserves of beans, chili, spag sauce, some fresh veg and frozen berries. Snuggled down in the salon and sang along to Mama Mia on dvd on my computer. Two things we don’t have and don’t want onboard are a microwave and a TV. 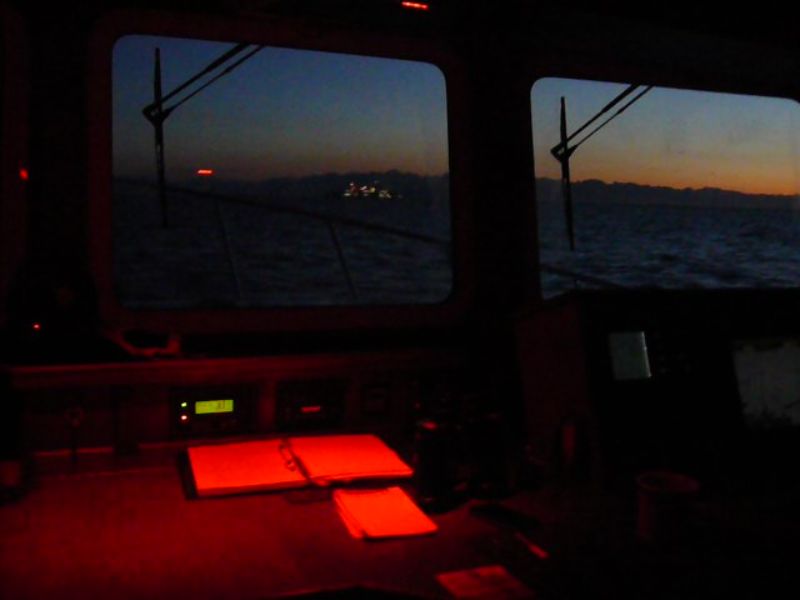 Wed, October 3, Silva Bay to Gibsons
OK, this really is our last morning. Had the alarm go off about 5:30 am while it was still completely dark. Listened to the weather reports on VHF and things seemed very settled down. Put the kettle on for tea, spread some butter and apricot jam on a couple of Hovis crackers and cast off at 6:20. The edge is only just coming off the darkness but our Furuno navigation screen and the full moon showed us the way of the tiny and treacherous Silva Bay opening. 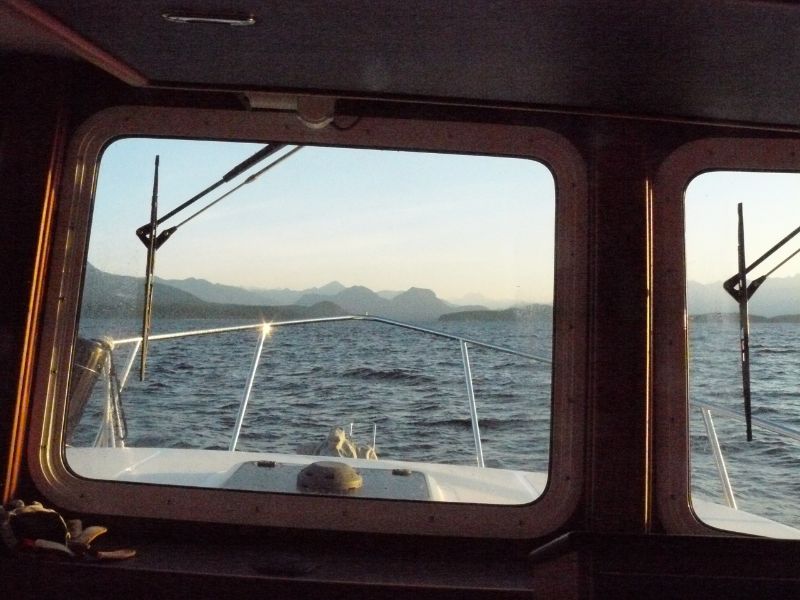 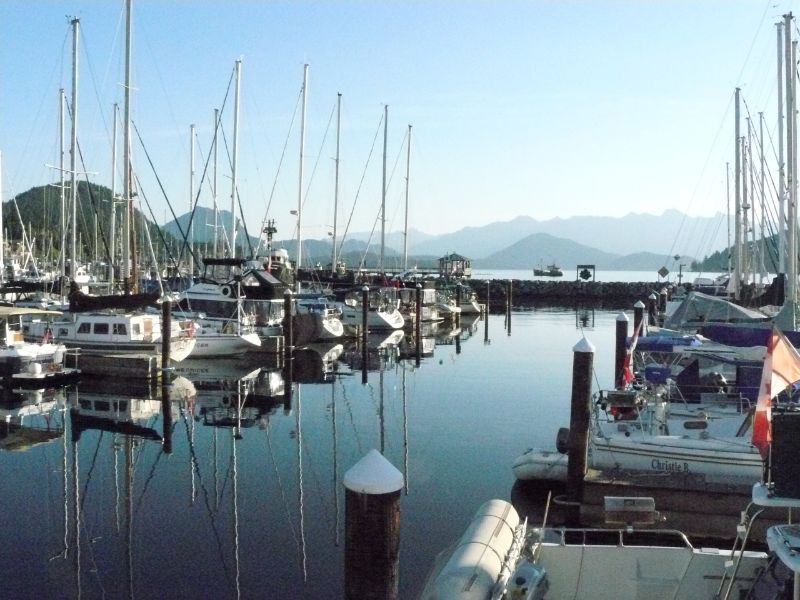 Home again after 22 incredible warm weather days. What a blessing it has been to have great weather and good health and to have been able to have gotten out and enjoyed it. I hope you’ve enjoyed armchair boating with us on this Fall cruise in Puget Sound. Now it’s time to get back into the painting studio after putting that pretty much on hold for many years of putting family and business first.