As the Festival of the Performing Arts (FOPA) opened its three weeks of music competition this week, parents and teachers of junior pianists – some as young as five – were dismayed to find that the piano sessions at the Sunshine Coast Arts Centre coincided with a scheduled exhibition by the Life Drawing group.

The walls of the Arts Centre’s gallery were covered abundantly with nude portraits of men and women, as a result of sketches using a live model that had been made during the drawing group’s many sessions. The festival had booked the room with no idea of the concurrent exhibition, said FOPA president Barbara Lightfoot. On festival opening day, April 9, approximately 35 children passed through the centre to give their brief performances.

“I think it is completely inappropriate,” Lightfoot said. “It was unfortunate that the gallery was not more sensitive about the display at this time.” She added that some upset parents had already written letters of complaint.

When Lightfoot first entered the Arts Centre to prepare for the festival, she asked whether the drawings would be on show during the performances and she was told that they would stay.

The festival’s past president, Sue Carson, pointed out in a letter to the directors of the Sunshine Coast Arts Council (SCAC) that children’s art or secondary school art, both of which have held exhibits during the spring, would be more appropriate for the age groups at the festival, who are usually between the ages of five and 18.

Carson noted that the festival has been held over the same weeks in April for the past 45 years so there could be no doubt about what exhibition to schedule for that period.

In a written response to Coast Reporter, SCAC co-chair Nell Burns acknowledged that traditionally the Young People’s Own Show has been in the gallery when the festival takes place.

“Last year we decided to move that show to February,” Burns said. “I wrote and spoke to the festival organizers last year to let them know that the gallery would not be as available as we would now be exhibiting adult artists, which might not be appropriate work. The SCAC gallery committee put together the exhibition calendar unaware of dates for the festival. However, this would not likely have changed the dates for this exhibition as it was the only time slot available.”

She added, “We provide the gallery rent-free to the festival during the days they are using it. At this point, we cannot remove the work.”

The festival is scheduled to return to the Arts Centre on April 16 and 17. 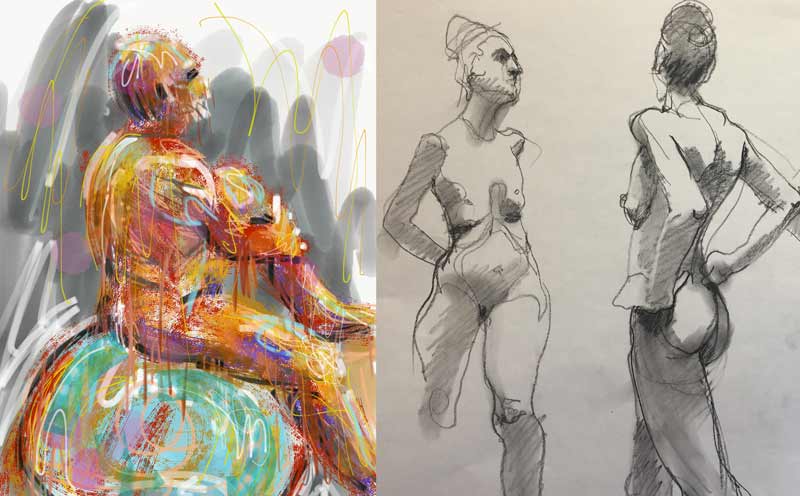 My Letter to the Editor

As coordinator of the life drawing exhibition “Slice Of Life” in the SC Arts Centre, I would like to apologize to Music Festival attendees who may have felt uncomfortable with our show of work from our figure drawing group.

It’s unfortunate that the annual children’s art exhibition was not held on their usual dates. I understand that the Children’s show will not be returning to the April time slot due to problems with booking the exhibit over March break. I hope our next show in 3 years will not coincide with theirs, however, the scheduling of exhibitions and events at the art gallery is out of our hands.

While I can apologize for the timing, I can’t apologize for our extremely professional, high caliber, diverse exhibition of highly accomplished life drawings. This is the 33rd year of weekly life drawing practice at the art gallery. With sensitivity and respect, we depict human beings in their natural form. Anatomy, light and shadow, form and mass, this is what we’re looking at.

Life drawing is an age-old tradition. It’s an opportunity for visual artists to strengthen eye-hand skills – an exercise similar to the musician practicing music scales. We celebrate the beauty of the human form, not hide it as something distasteful or threatening. Our exhibition of sketches are of the human body, nothing more, nothing less.