Dropped our guests off in Seattle and arrived in the very industrial shipping Port of Tacoma in the evening, happy to just sit down to a hot dish of reheated tasty veggie pasta and call it a day. 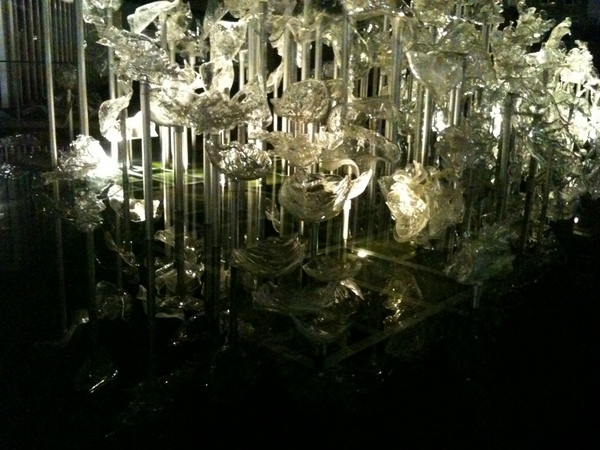 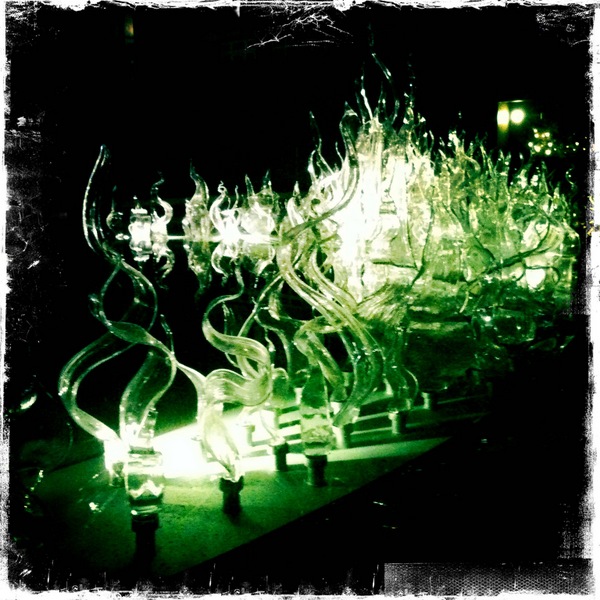 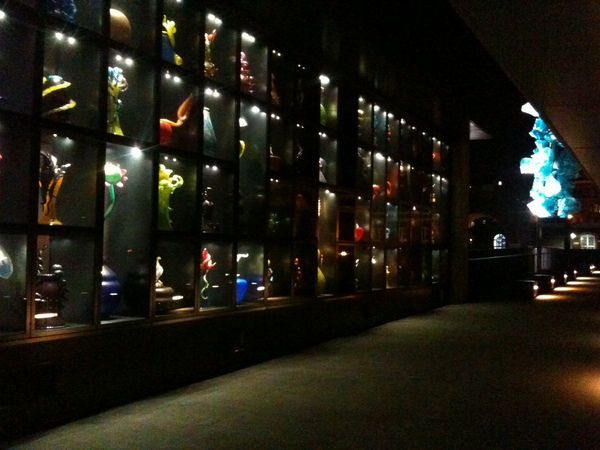 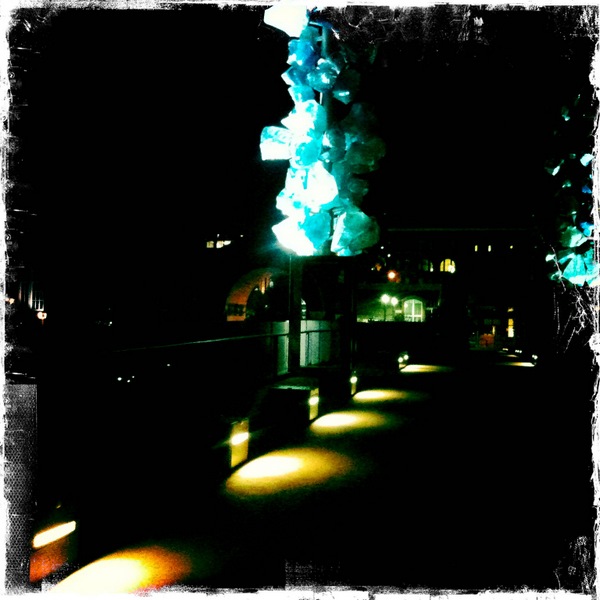 We are docked just below the Museum of Glass. We were quite shagged after 12 days out and 3 days of extra fun with guests but we were so glad that we managed to haul our carcasses off the boat and walk up to the reflecting pool glass sculptures and up to the Bridge of Glass after darkness settled in. Lovely and especially magical at night. We’re a bit disappointed the museums will be closed the 2 days we are here but really, the outdoor sculpture and Bridge of Glass were my main destinations here. I may just have to make a trip back in November for the Ray Turner  show though, looks HOT!! 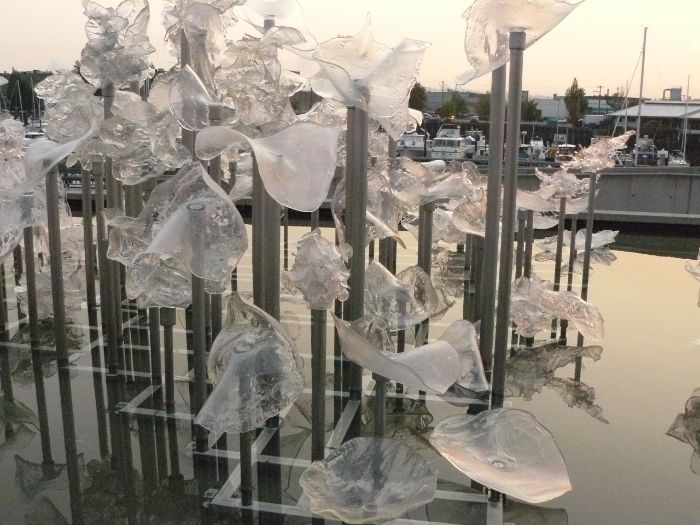 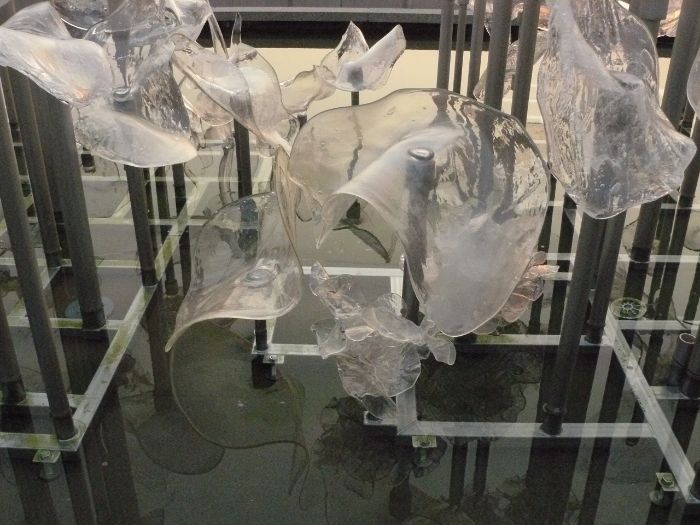 The pool has clear glass which is glowing and luminescent by night and quite a bit cooler and flatter by daylight, plus the guts and mechanisms below the water are visible by daylight. 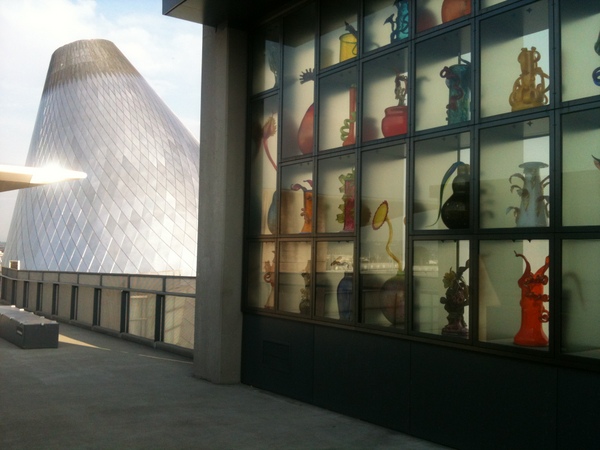 The Bridge with its giant towers that resemble giant blue sugar crystals on a stick are great by day or night. The wall display boxes are magnificent and what a gift to the public! Gorgeous hunks of glass art, huge vessels and vases glow and change throughout the entire day of shifting light. It’s too hard to pick just one favorite!! 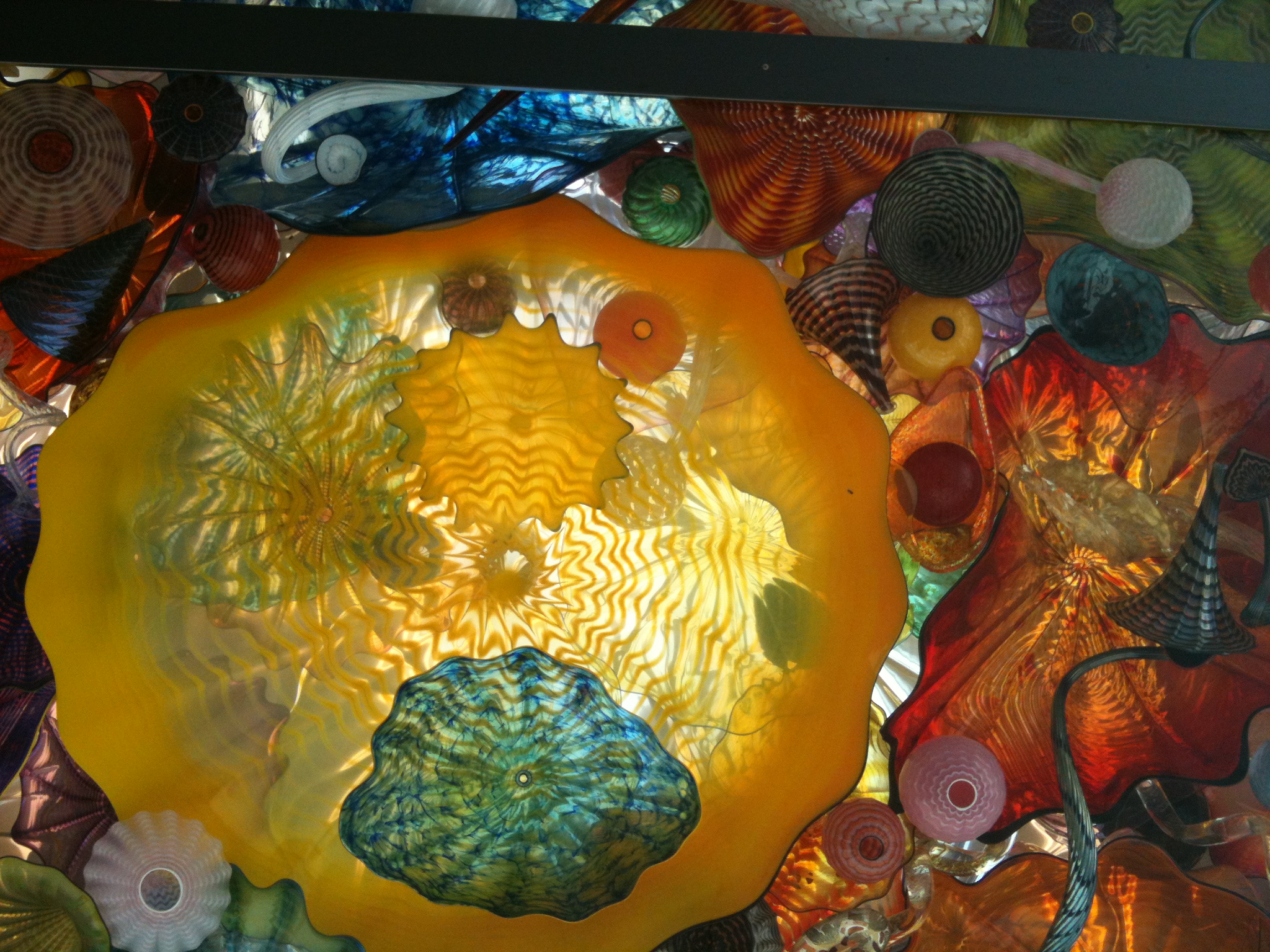 The overhead installation is a wonderland too. It’s like a giant toy box or jewel box that has been emptied overhead and we walk underneath and marvel at the colors, shapes and luminous layers of crazy objects and forms spun from molten glass. Marvelous! 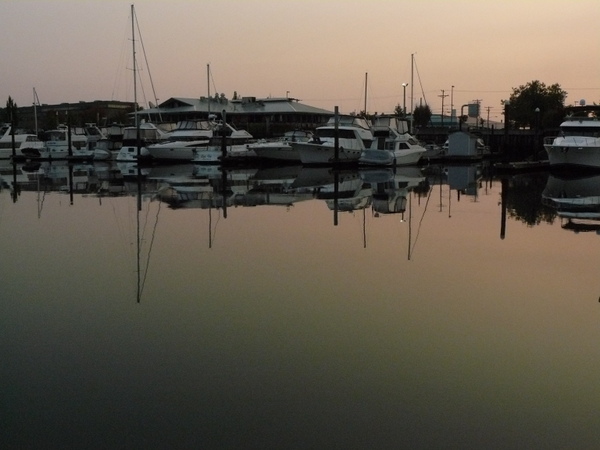 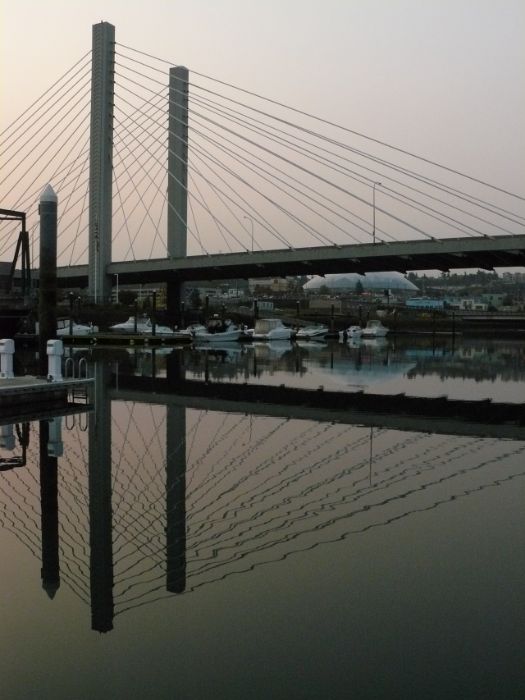 Amazingly Dock Street Marina which is very nice only has one washer and dryer but I guess I needed the exercise humping 2 big bags of laundry up the ramp anyway, only to bring one back down. How can a marina this large ever think that one machine would service its customers when it doesn’t even service one boat with a good load? I would have gladly used 2 washers and dryers just myself and the other boats?? I did a few things in the sink, hung them up and carried on with just washing our sheets and few socks and knickers in the one load. Honestly, a huge undersight on their part. The dock attendant agreed and gave us a little discount on our bill.

We wandered uptown to catch up on email at a coffee shop with wifi and I tried to explore the University of Washington Art School but it wasn’t easily accessible to anyone without an escort. Peeked into few studios/workshop areas but there was not much to see except for students and good facilities. Checked out the University library art area and was a bit underwhelmed. Vancouver’s Emily Carr’s library beats the pants off this one, has a huge magazine area and this one had no magazines that I could see anyway. Are real physical libraries going the way of the dodo? 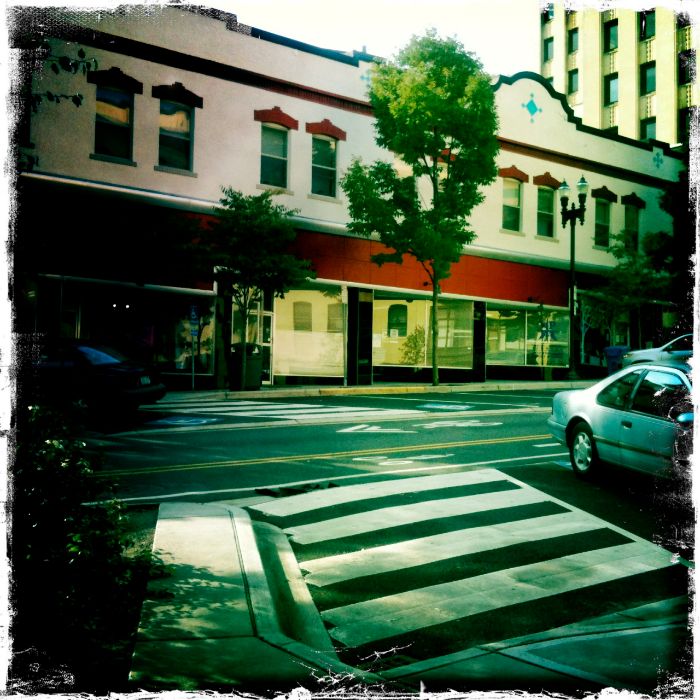 Lunched at home on some fresh BC salmon that we had had smoked for us in Vancouver then hopped on the free trolley and rode up to the Theater District. Sadly the guts of Tacoma have been malled by suburban exodus and little remains of downtown core other than a handful of boutiques and drug rehab places. 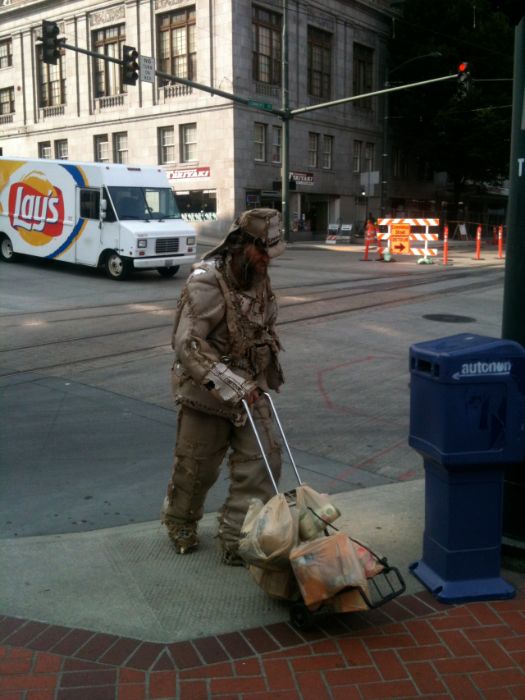 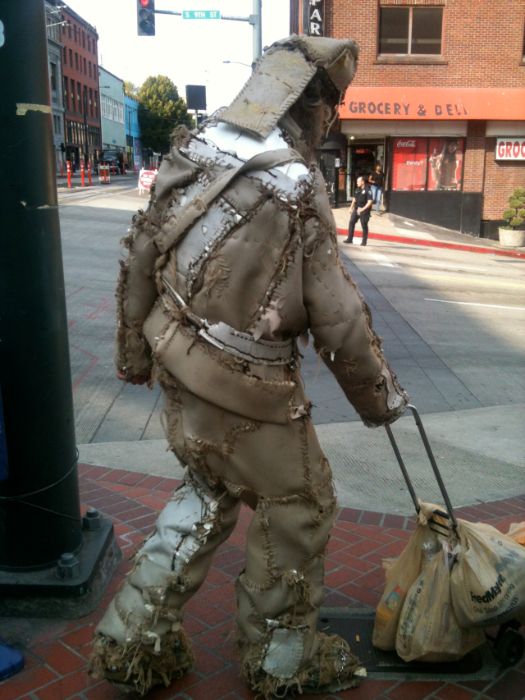 This amazing eccentric fellow with an elaborate suit cobbled together from I really don’t know what walked along pushing a tiny buggy and plonking along like the Tinman from Oz. Fascinating! I tried to engage him and compliment him on his very interesting outfit. He looked up at me with a great beard but chose not to engage. Too bad, I’ll bet he does not get many compliments on his unique outfit. A true eccentric character that makes my own eccentric brother look like a cupcake! 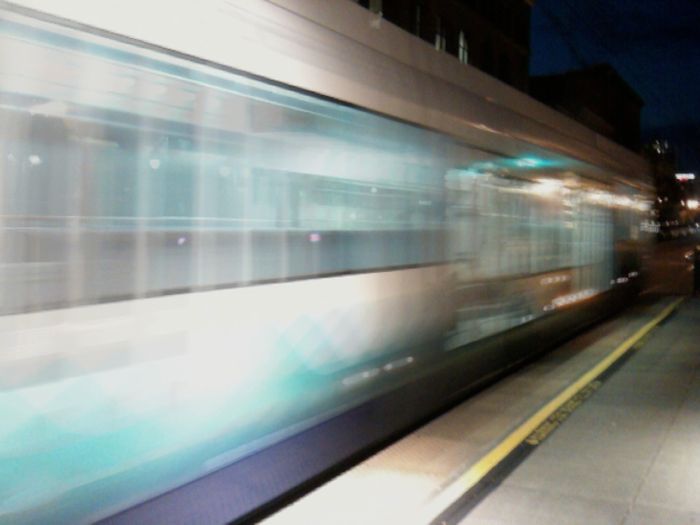 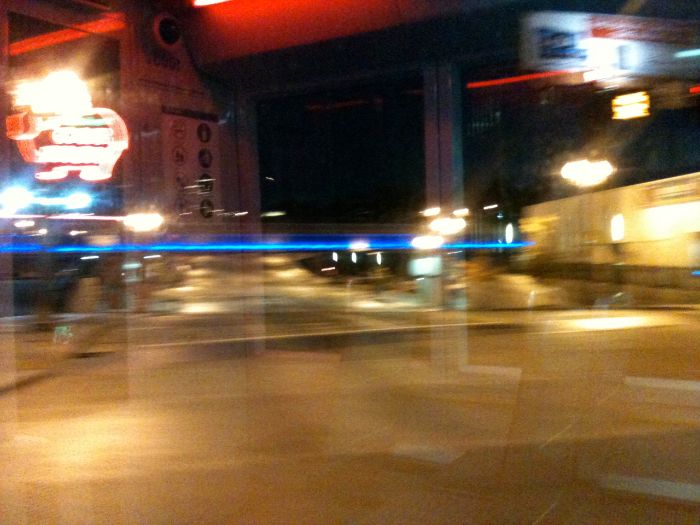 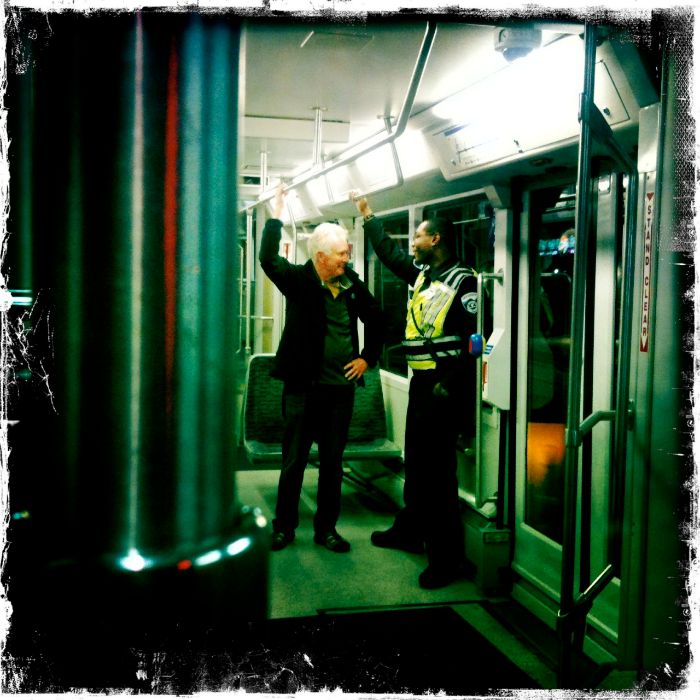 After a small picnic dinner back aboard, we took the free trolley uptown to the Tacoma Dome then back up to the Theater District just to check out the evening’s entertainment and sights. I have a new app on my iPhone, SlowShutter, which I am playing with to catch light trails and low light effects. I just keep shooting and learning and am getting some interesting shots but this app does take some playing with for sure to figure out. The first 2 of these three photos are SlowShutter shots. 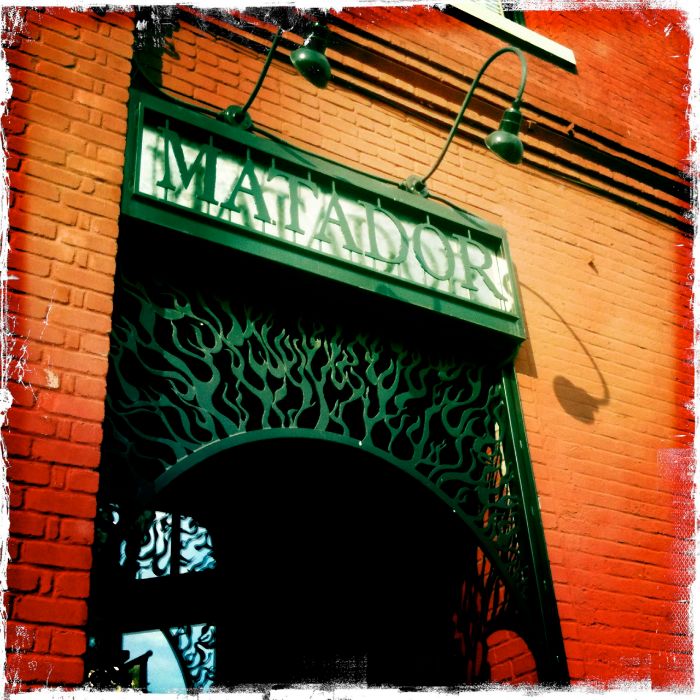 Stopped in for a glass of shiraz at The Matador, a pretty candlelit place and caught the end of an incredible Seattle Seahawks football game. Seattle went from 6 to 13 against Green Bay Packer’s 12 in the very last second of play! Seattle made a completely freakish catch and won by 13 to 12. Hysterical!! This game ending will be the talk of many water coolers tomorrow! Wow. I’m not a massive football fan but Monday night football seems almost unavoidable when in the States so I go along with the flow and just cheer for good playing and this was exceptional. 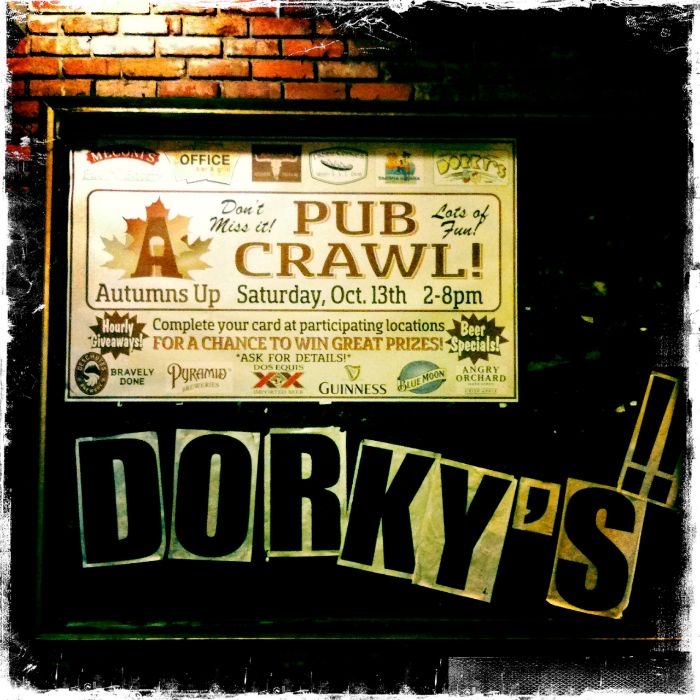 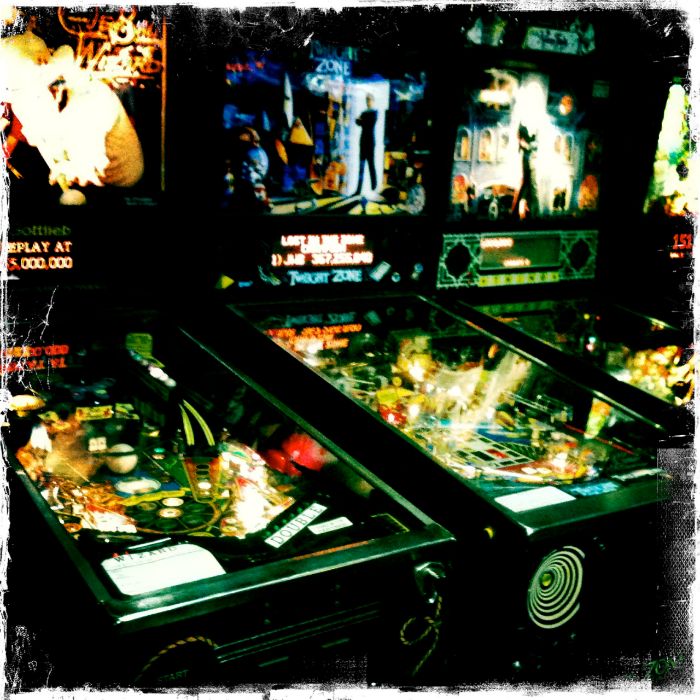 Stumbled accidentally into a video games arcade and watched gobsmacked as families, singles and laughing groups of friends fought off bad guys and swung at things on screens and tables. When you only go into one of these places once a year, it’s pretty fascinating eye candy!
Published on: Oct 15, 2012