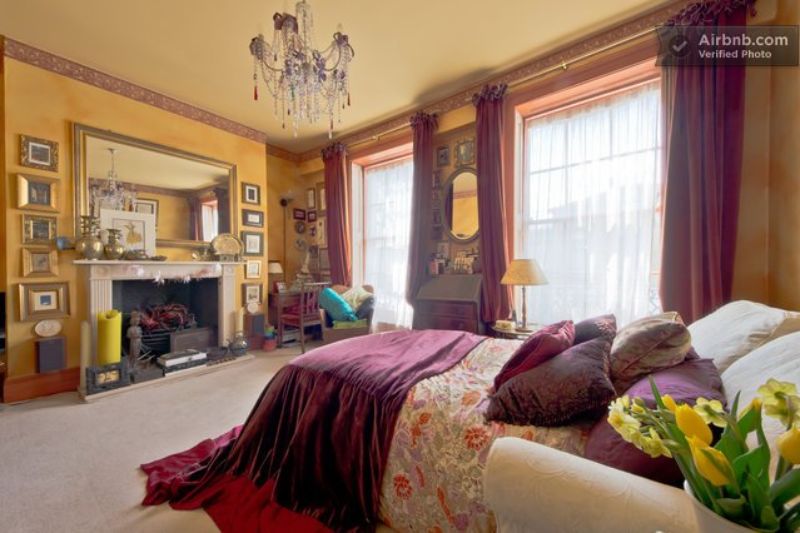 London
Had just one quiet night in London on my way to Spain. Arrived in the afternoon and reached my first little Airbnb that Dennis had booked for me. Thanks Den for doing all the bookings while I was busy painting, getting ready for my exhibition, publicizing it, and updating two of my websites. He’s planned and booked this whole trip, something he’s been thinking about for about a year and now that he’s retired, we’re finally able to do it. 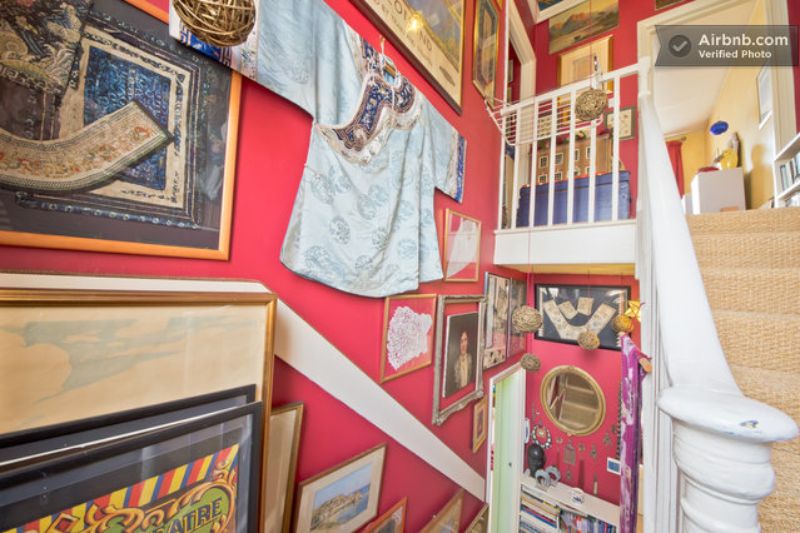 I felt right at home in Tessa’s flat in Camden and it’s too bad that we didn’t get more time to actually chat together as we certainly had a lot of connections. Her flat is richly ornate and filled with treasures from the world of the natural world, travel, circus, costume and theatre and definitely not IKEA. I had a little rest then headed off to Camden Town, just a 5 minute walk down the road. Jake lived just around the corner a few years ago and Dennis and I spent most of a year many moons ago just down the road nearby, living in a flat above a pet store on Caledonian Road and doing Singing Telegrams. My bed was a sofabed in the sitting room which she turns over to guests when they come and the kitchen and bathroom are shared with Tessa, just like staying in a friend’s home. I guess her prices vary but I see it listed now as from $78 per night.

We used to come up to Camden Lock Market on weekends and wander around and even though I came from chilly wintery Montreal, I was rarely as cold as those days on Camden Lock! Those crazy Brits are out there all winter on the market stalls bundled up with scarves and coats and fingerless gloves and freezing their frigging arses off in the cold blustery weather! Geez, at least in Canada we knew when it was time to go indoors, for heavens sake! Well, it was chilly today too and even snowed a bit! Luckily I brought my nice woolly scarf and wool hat and am fairly well prepared for most things. Although we are aces at packing extremely light I did bring a check-in bag as we are away for about a month so what the heck and thanks to our great house sitters D&M, I can share our adventures on the blog.

Camden Lock, just as kinky, gritty, wild and colourful as always, lots of character and local colour. I peeked into a few places with an early dinner in mind and happily I held out until I found super kinky vegetarian place InSpiral where I enjoyed some wonderful roasted veggies and a glass of wine. The place wouldn’t have been complete without the pirate Johnny Depp lookalike, complete with twisted beard dreads and swathed head. On to Valencia from Gatwick after a little walkabout next morning… 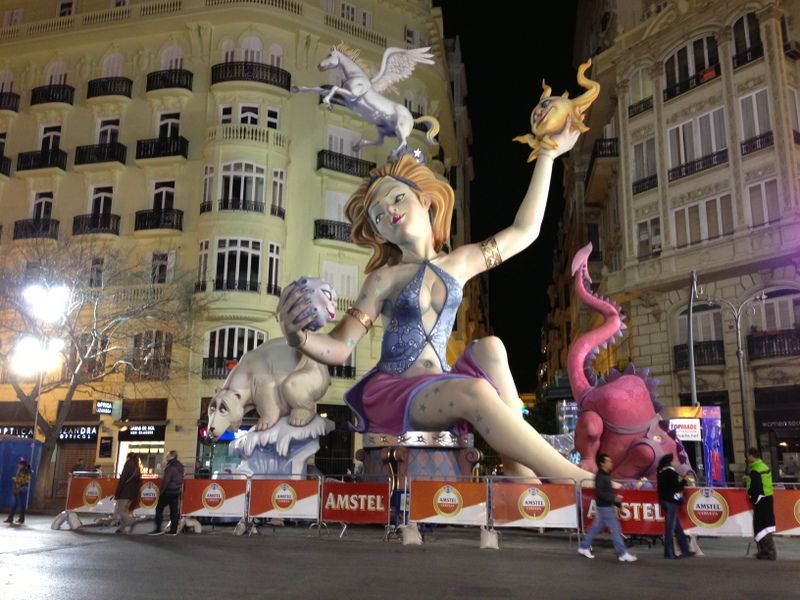 Valencia, Spain
First place we stayed in Valencia was right in the old sector near the Serranos tower. Dennis had already been here a couple of weeks ahead of me and had made himself right at home, cooking for himself and spending his days cycling around on a bike he rented for the whole time he was here. 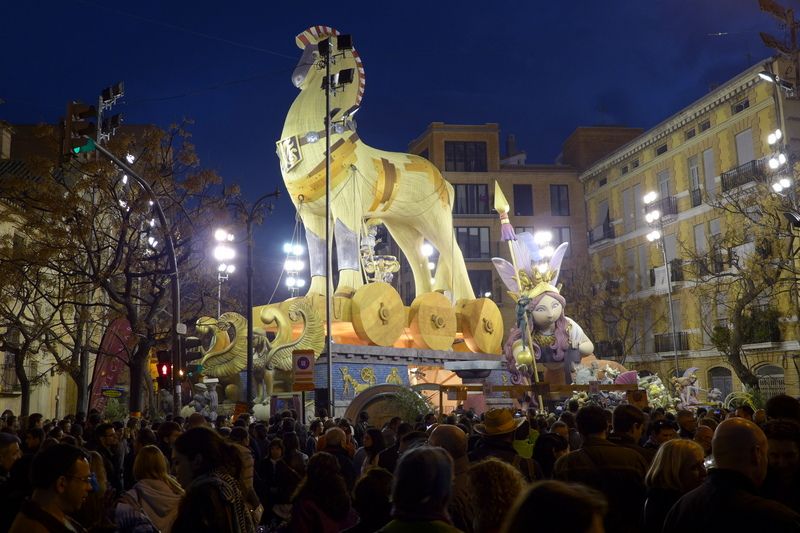 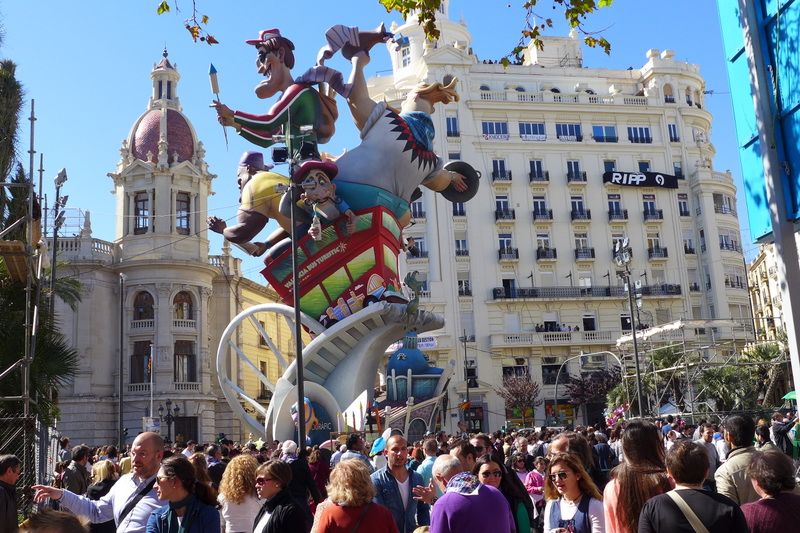 Valencia’s huge las Fallas (fie-USS) festival was on and the climax of the event happened the weekend after I arrived. Each of more than 700 neighbourhoods create a large to huge monument and a smaller children’s monument that is to be burned at the end of the festival. These are built over the entire year in workshops and then assembled in position in all the public squares. They range from elaborate and beautiful to small and hilarious but are most often somewhat vulgar and sexy, poking fun and/or protesting against public corruption and the imminent increase to 21% vat tax. 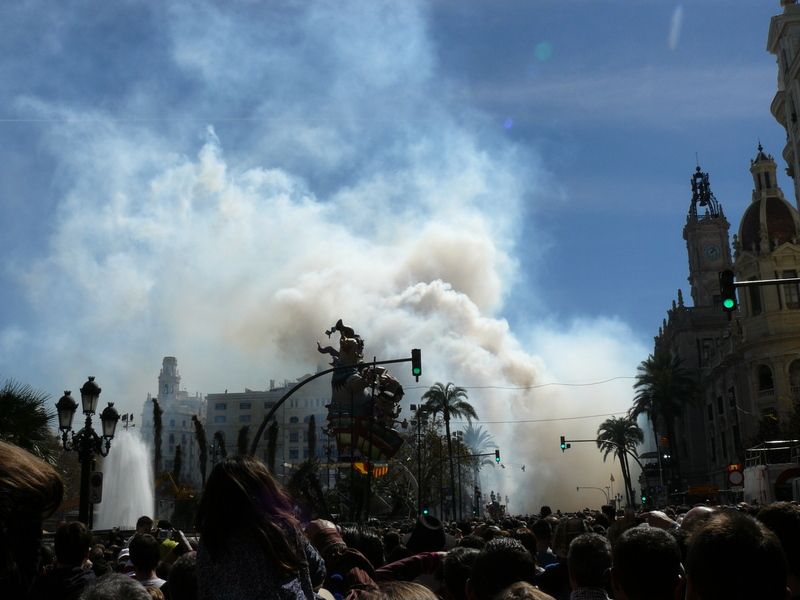 Each day at 2 pm in the city’s main square there was a large fireworks display. These are noise and smoke fireworks as opposed to the colour and shape ones we are more familiar with shown after dark. It sounds odd but is actually very impressive especially the closer to the epicentre you get to stand in the throng and crush of the crowd. Definitely not for those who are unhappy in crowds. 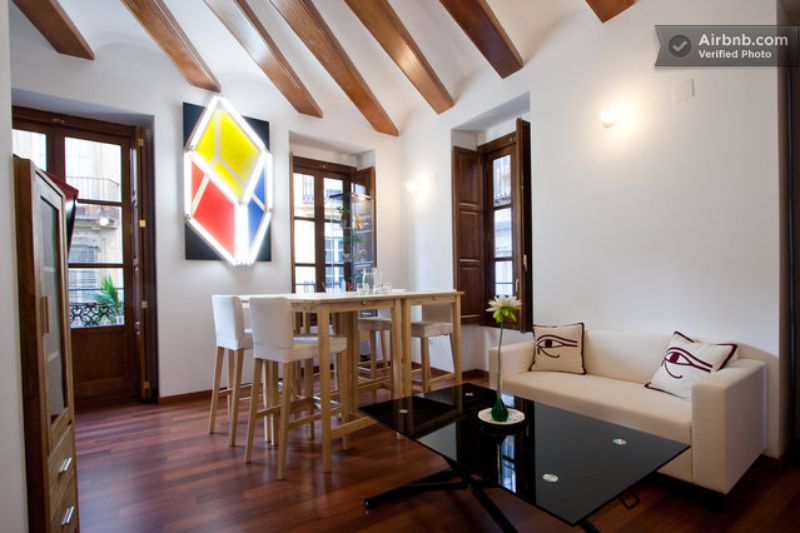 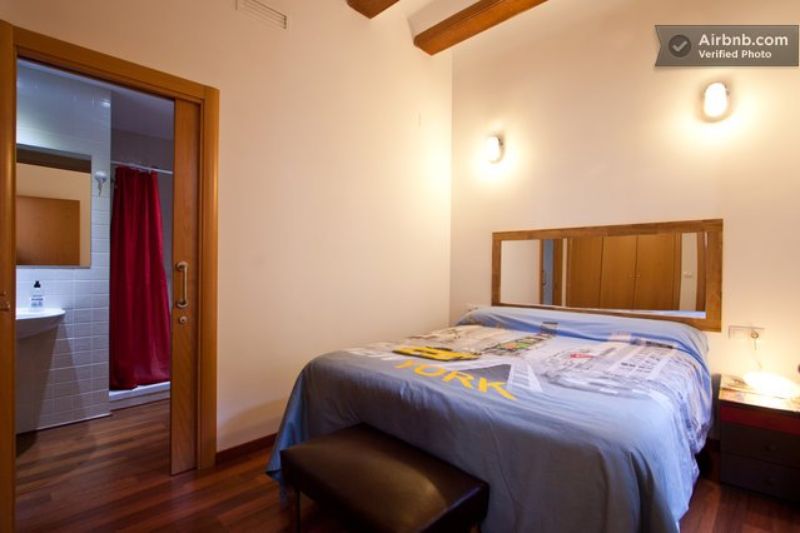 Our little old town Airbnb flat, above, was already let for the festival climax weekend so Dennis had us booked out more into the suburbs in a very comfortable apartment, the Art Loft. 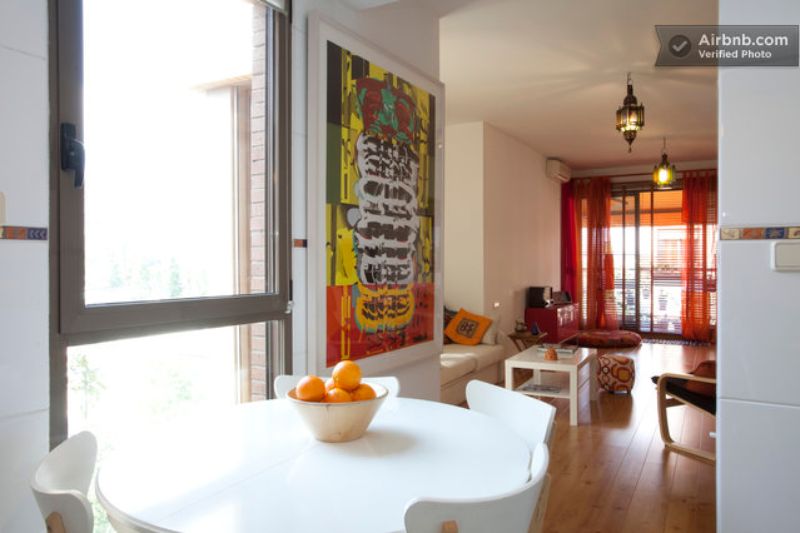 The very hospitable young family of Nico, Maria, their 2 little girls and a new puppy came to meet us and welcome us to the flat. Getting around by bus, rental bike and/or metro was easy.

Besides the wacky sculptures and fireworks crowds, there are parades and processions each day with people dressed in their traditional costumes carrying an astounding total of 25 tons of flowers to decorate the huge cloak of a massive wooden Virgin and child. There are hundreds and hundreds of these elegant folk each day and capturing it through the camera lens was a joyful task! The women and young girls with the red and yellow ribbons are their communities’ winners for this year. 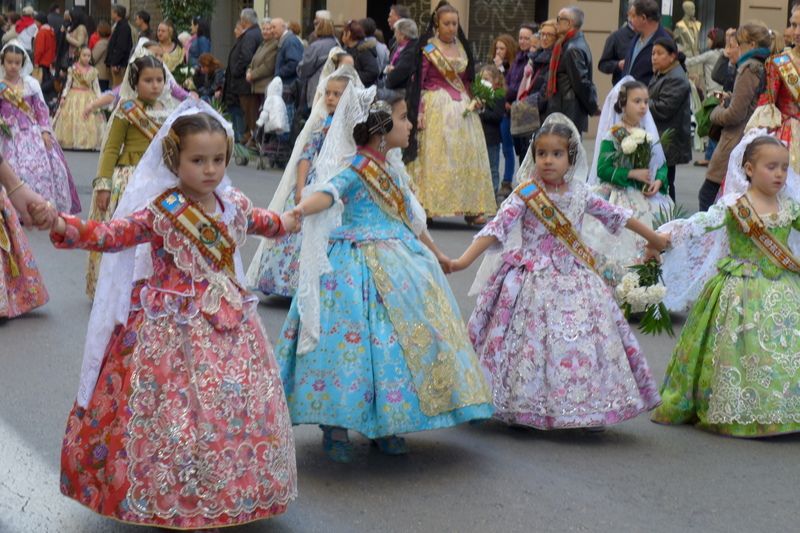 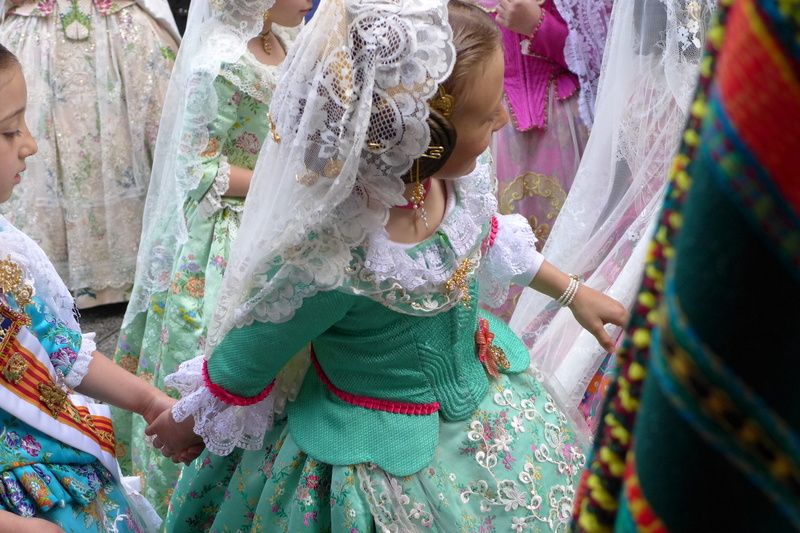 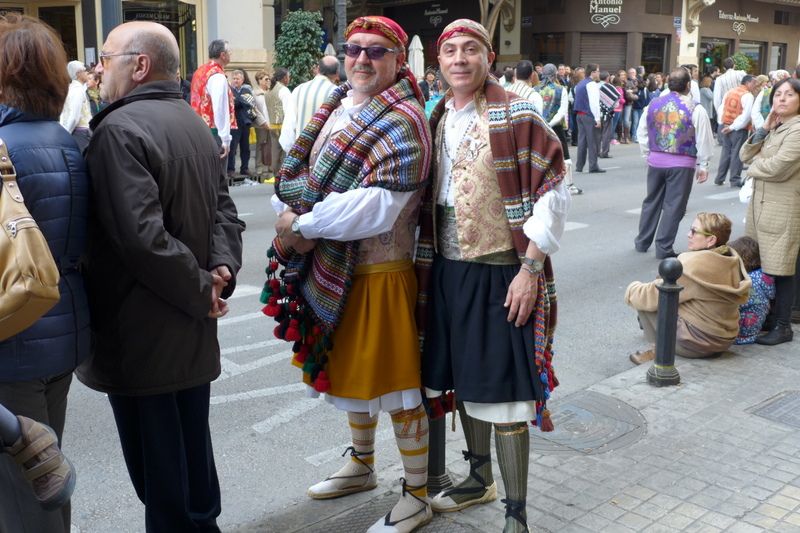 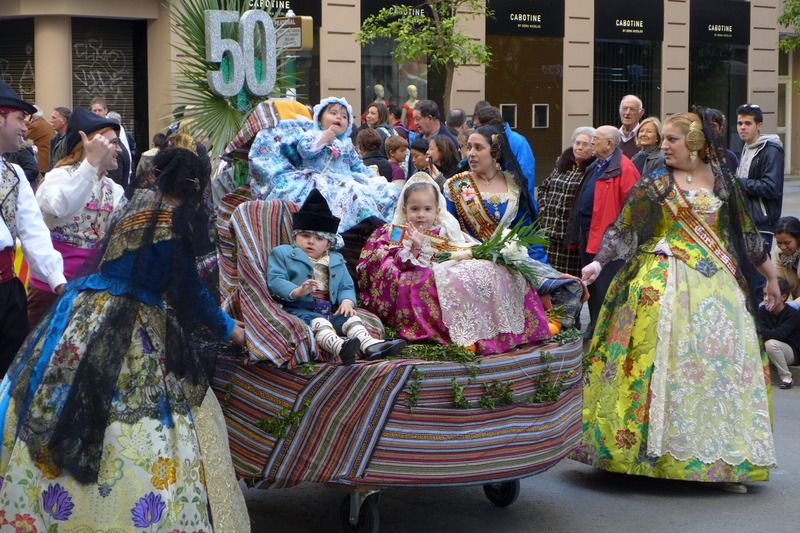 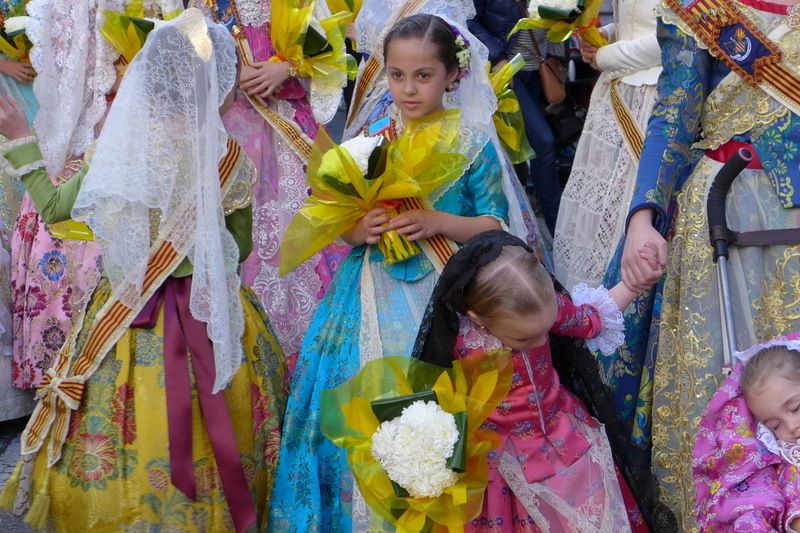 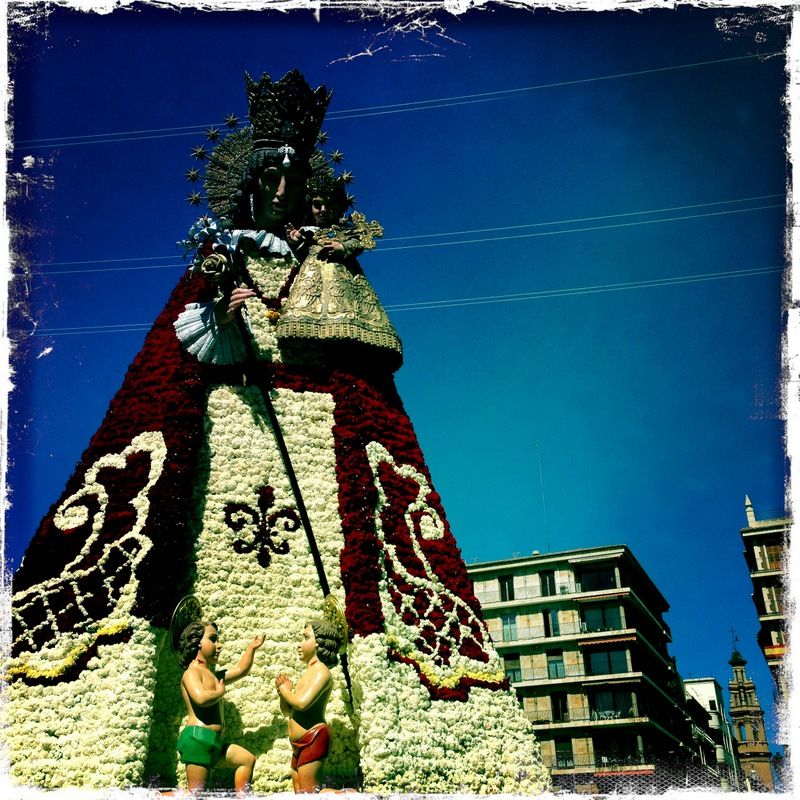 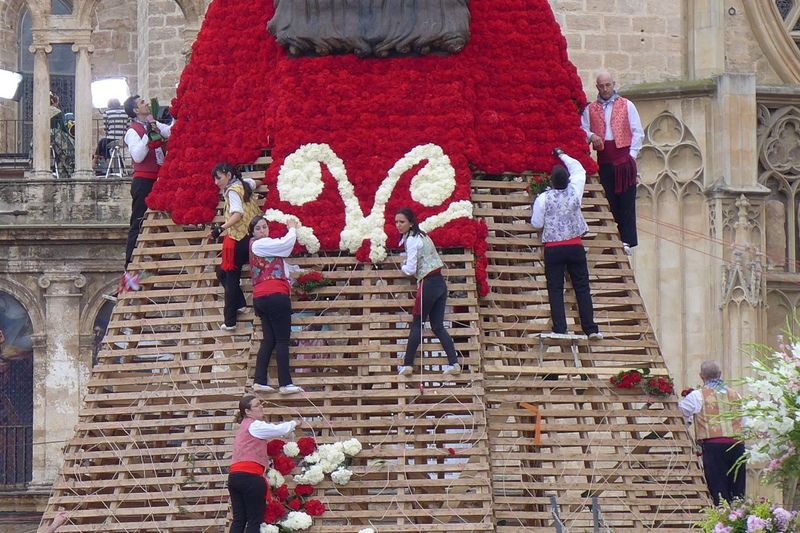 On the final night, we joined a local neighbourhood for the burning of their children’s “ninot” Falla sculpture at 10 pm. The fireworks were lit on a line that drew the fire down to eventually ignite the little sculpture which had been soaked with cups of fuel to help it go up in flames. Each neighbourhood wore fleece jackets in a bright colour, orange, blue, red, green that helped identify them. This one’s was orange and the big group of kids all joined hands and danced around the circle around the fire. 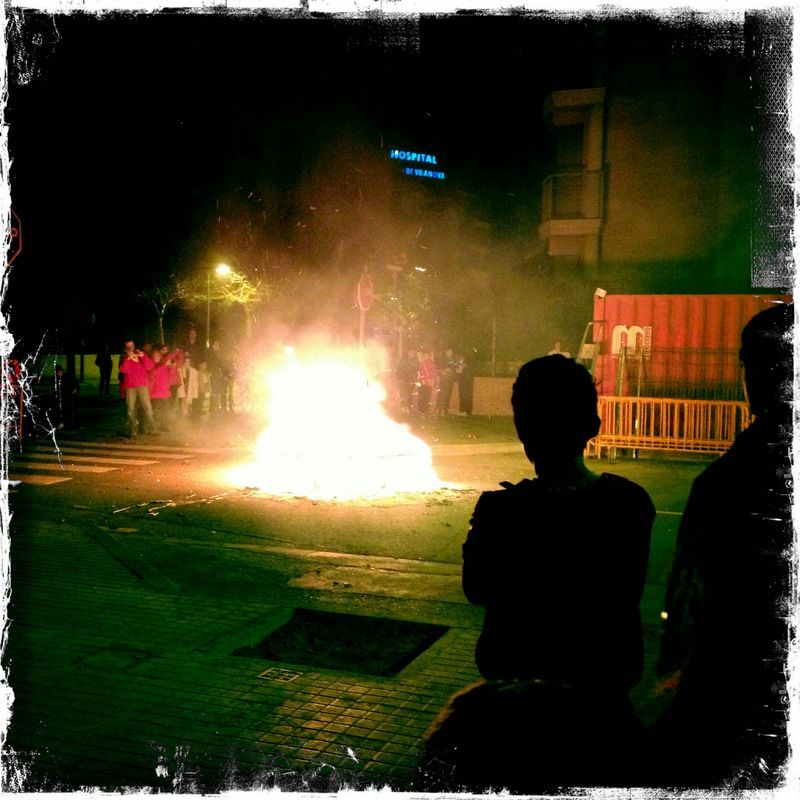 There are lots of kids here, we see many families with 3, 4, 5 children. We have seen no out and out yobs or asbos, Brit-speak for snarky, loutish, anti-social behaviour. In spite of Spain’s high unemployment, we’ve also seen extremely few visibly homeless although some beggars are around but far far less than in Vancouver. I’m sure they are here but we have seen little trace of them.

We wanted to wait and see the local large Falla burn but it was only going to be lit at 3 am! The firemen set the schedule so they can be present at each large burning to protect the surrounding buildings and trees. So we headed home and enjoyed the city-wide night sky fireworks from our apartment balcony window.

On our last day, we went back to the old town to rent bikes and roamed up and down the city and river park. 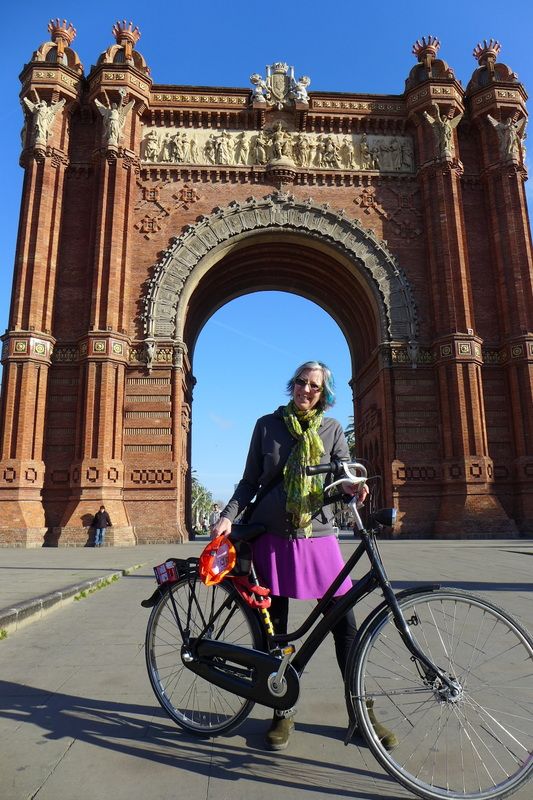 This nice flat city has wonderful wide cycle paths and wide pedestrian boulevards making it a fantastic cycling city. Such a treat especially for us coming from Gibsons where we live half way up a very long steep hill, making any cycling from our place a bit of an adventure. I am a returning cyclist and we are finding it SO much fun that I just wonder why we have never thought of trying it before now? My cycling gear is leggings, my long sleeping t-shirt and a light rain slicker. I brought running shoes and my Blundstone boots so I can give my feet some variety. Dennis brought only one pair of running shoes and one pair of jeans, a seriously light traveler!

The wide shallow river that winds through the center of the city has been made into a park and the destructive waters have been diverted. What a wonderful park! The Museum of Arts & Sciences made a nice destination, providing good eye candy and backdrop for a Mercedes Benz event.

What a wonderful treat Valencia has been! I’m so glad Dennis had this bug in his bonnet and that I was able to hop on a plane and join him the day after taking down my Figures on the Coast exhibition! I would definitely recommend Valencia as a travel destination. It is a welcoming, beautiful, manageable city with lots to offer and was not, in March, overrun by international tourists. We heard almost no American, German or Swedish at all and enjoyed an authentic Spanish flavour in spite of the hard economic times.
Published on: Apr 1, 2013