After wandering down the Oregon Coast, thanks to our new best friend, our car navigation system, we found our way through the winding small streets up into the forest beyond Corvallis to the home of figurative artist Clint Brown just in time for cocktail hour. He and his wife Cheryl have a lovely forested property, very tranquil, complete with small stream and pool which used to have some trout until the long legged marauders fished them all out. We took a lovely tray of dips, chips, green beans and grapes down to a little gazebo and got to know each other over a glass (or two) of wine. The first thing I noticed about this gazebo was no screens! How sweet is that! They do have them on their home windows but the garden doesn’t need them as not many mosquitoes here. What a treat. 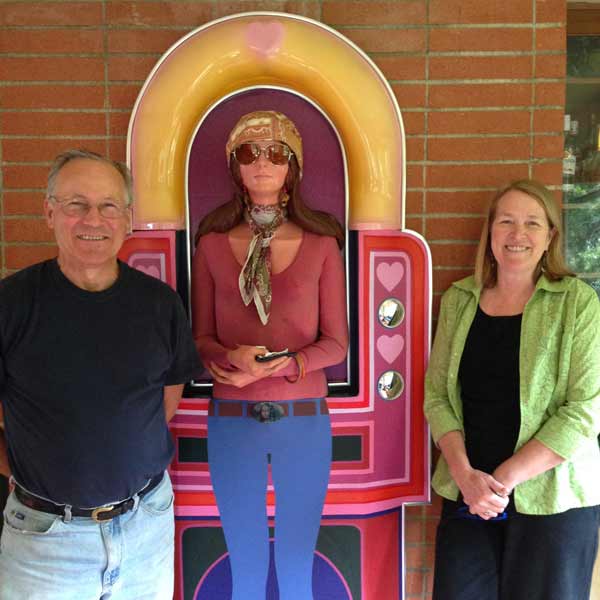 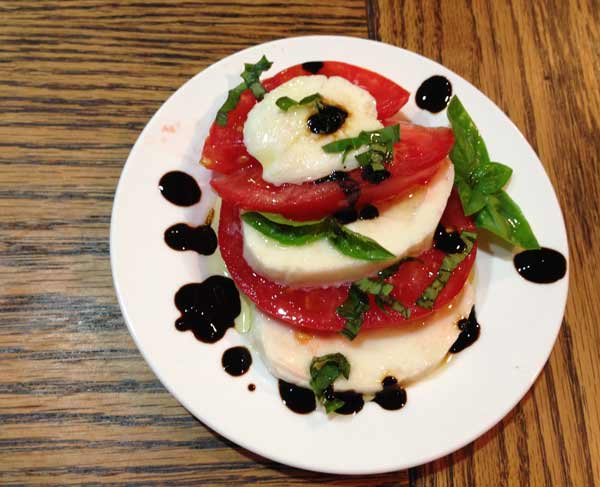 Before dinner, Clint shared his impressive figurative drawings with us. 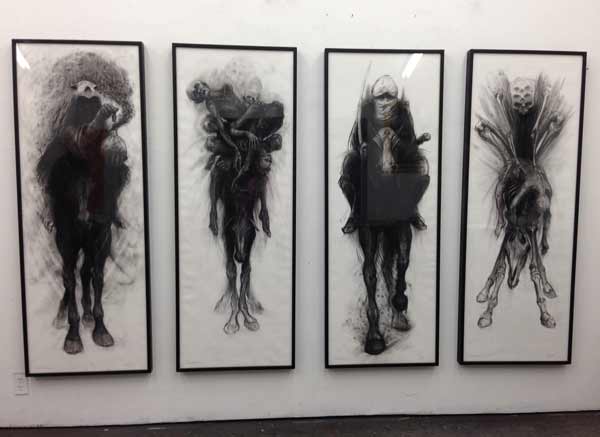 The Four Horsemen, above

Clint has been retired from teaching life drawing and painting at Oregon State University for ten years now, after teaching there for 33 years. 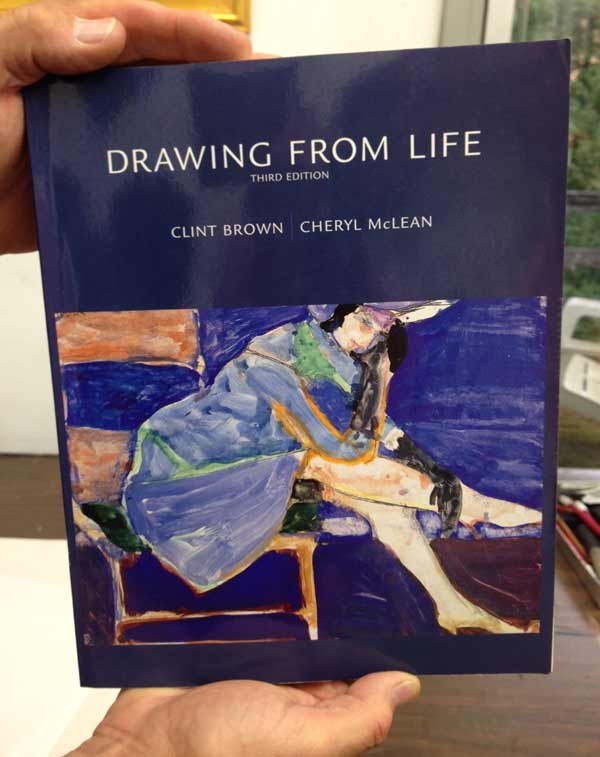 He created what was for many years the most popular figure drawing textbook in the USA Drawing From Life which was later translated into Chinese. His graphic designer wife Cheryl did the layout. 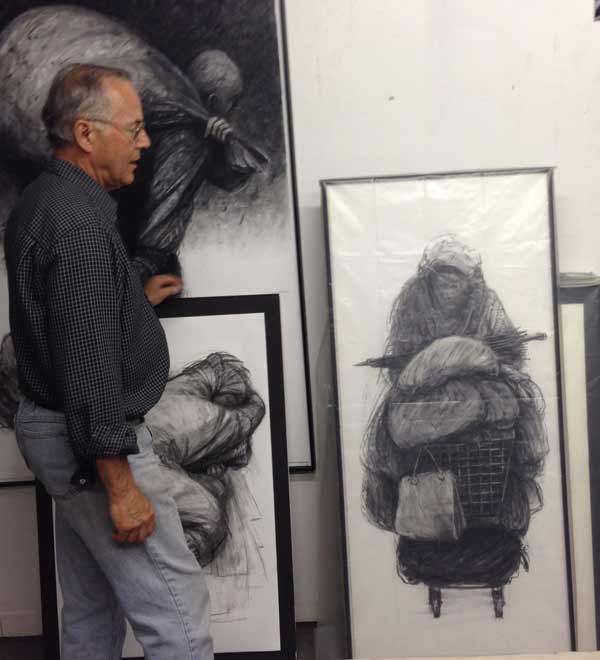 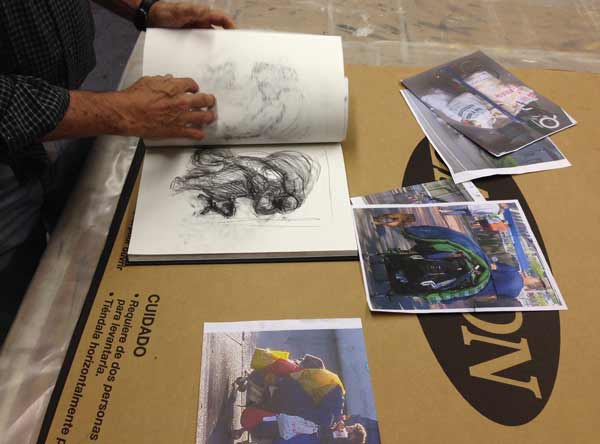 A series on street people with meaningful titles like Once a Consumer, Restless Nights, The Collector, Becoming Invisible…

Portland, just up the road here from Corvallis, and Washington, DC have the highest numbers of homeless folks per capita. Clint regularly stays at a small place in Portland, passing sometimes up to 40 sleeping forms each night under a nearby bridge. These drawings were worked from sketches and photographs and then brought to life in the studio. He did talk to some of the folks but mainly just quietly observed and recorded before giving them form on gessoed paper or panels in his large vine charcoal and black conte drawings. 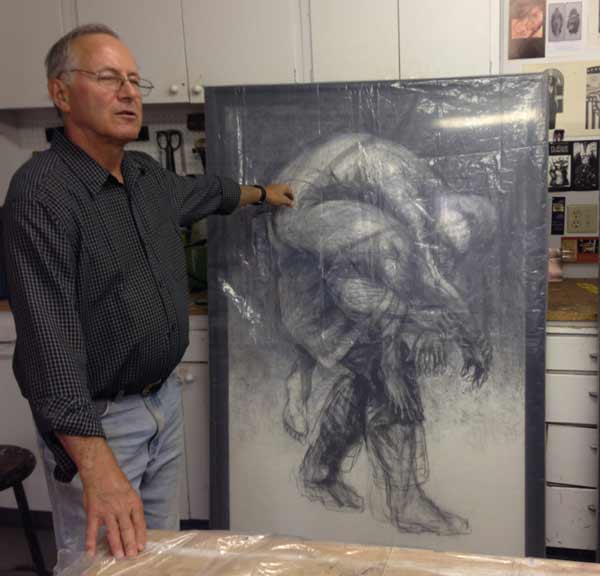 Clint did 4 of these large fireman drawings in response to September 11, one person carrying another in a fireman’s carry. 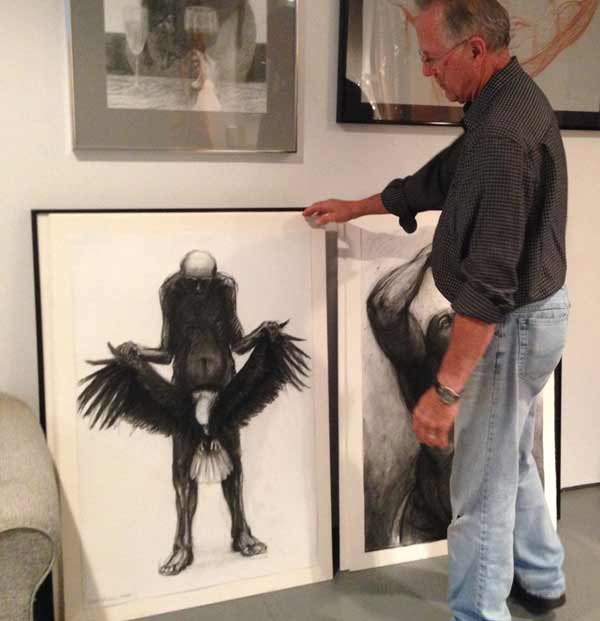 Environmental Advocacy series about corporate greed and pollution, The Possessors, a man holding an oil fouled eagle like a giant flaccid penis, spent. 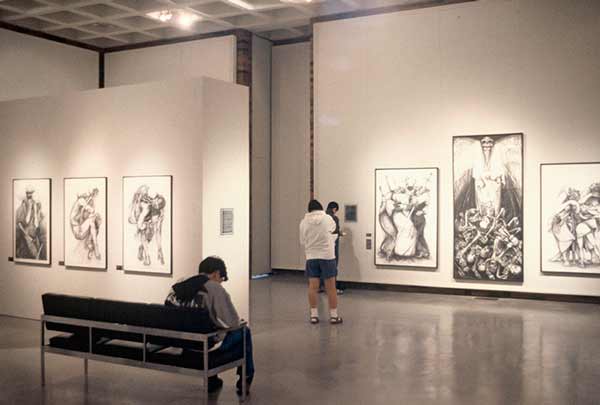 In 1990 - 95, Clint produced maybe his most important body of work, The Plague Drawings about AIDs epidemic unfolding around the world. These drawings are large, several are 44” by 8’ on paper. 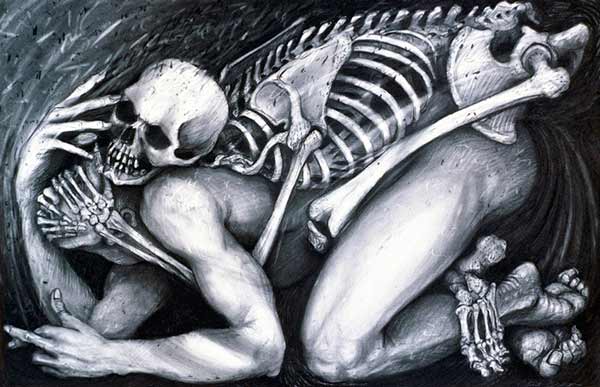 Oregon State University bought 3 for their library, a not so subtle way perhaps to get some message across to the young sexually active student population that an act so intimate as making love could carry a death sentence as a consequence, the new reality that the power of sexual desire could lead to one’s doom and was just a bit more serious than a sexually transmitted disease which could be cleared up with a little treatment.

The Plague Drawings traveled to university galleries all around the country. Proceeds from the show and associated book went to an AIDs foundation. 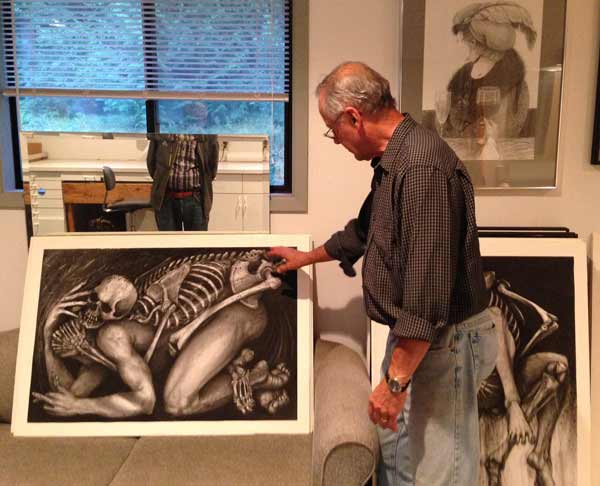 Clint used to borrow the University anatomy skeleton which his daughter nicknamed Skinny Guy and bring it home in the summer. As you might imagine, these complicated poses with the humans and the skeletons were all worked as composites and not from actually posing the model with the skeleton. 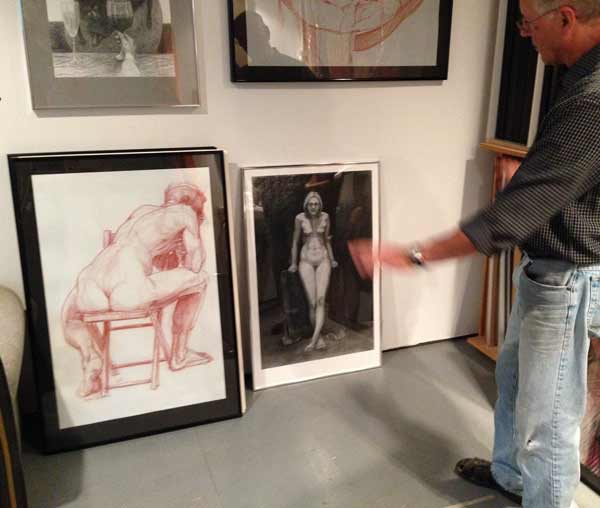 The main point Clint tried to impart to his drawing students was to use value to render light and model form. He would have the students draw from the live model for only 5 minutes then fill in the values once the model had stopped the pose so they would learn to interpret form through logical placement of values, using darks to make things recede and lights to bring form forward. Most of their longest drawings were about 30 minutes but some like this black and white one above were 3 hour poses. Clint uses charcoal and then conte for the deepest velvety blacks, sprayed with a light fixative. 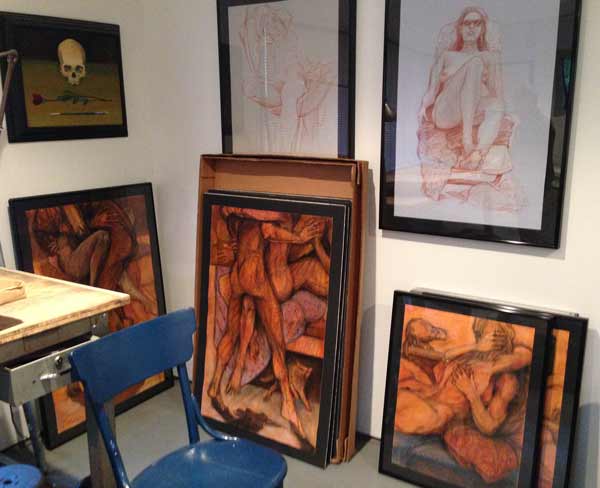 The Sanguine series, the color of passion, red, blood, gessoed paper stained with acrylic ochre then burnt sienna, wiping down and building up interesting textures even before laying down the charcoal. 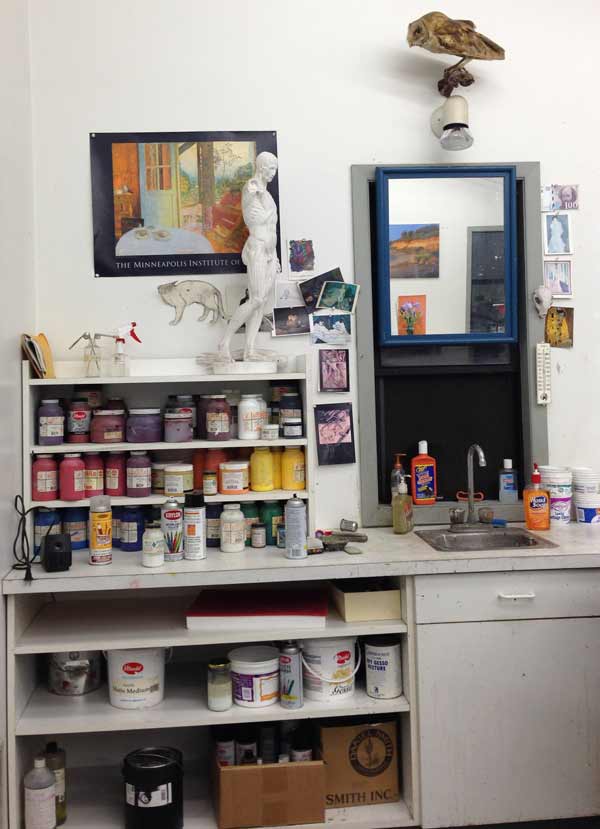 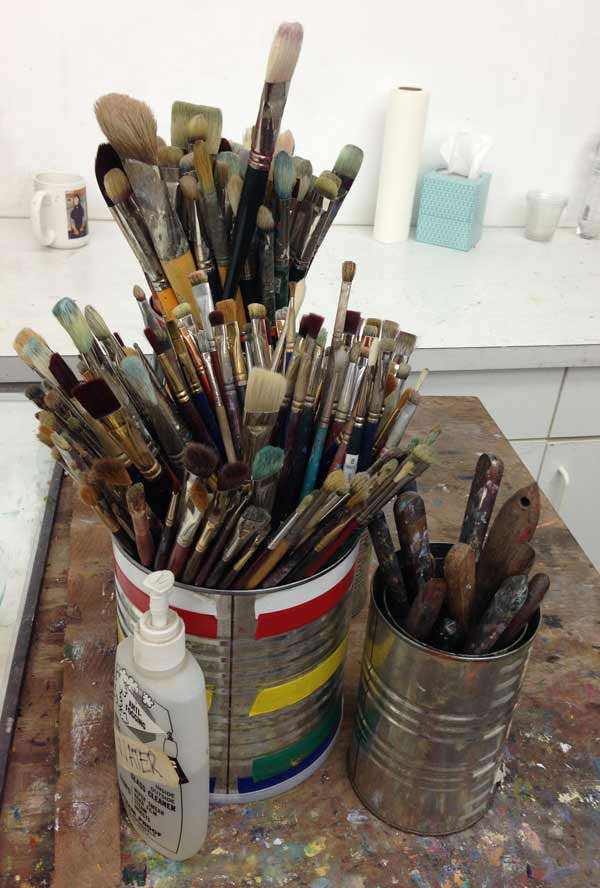 Clint paints in oils but has this nice pile of acrylics which he uses for under-staining. Note the lovely taxidermy owl keeping watch over anatomy man and the paint vault. 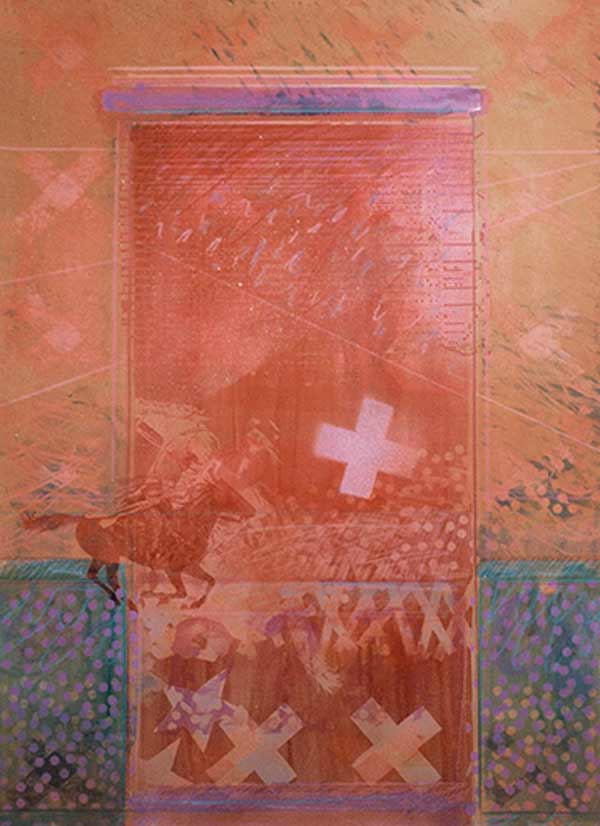 He used to work in acrylics for his large abstracts which he admits sell better than his figure drawings. It’s easier to live with a “nice” abstract than a dark drawing with a human skeleton.

Over his art career works ranged from acrylics abstracts, bronze sculpture, plastic forms added onto painting panels before returning about 30 years ago to the human form and drawing.

Clint feels like most abstracts act a bit like a colorful filler rather than having strong content, they’re more easily digested than stronger work with teeth. He wants his work to be emblematic rather than just be pretty to look at. Artworks today have to compete with all kinds of other visual temptations including motion and sound, all available to us in a few keystrokes. It’s harder today to be a stationary wall artist but unlike temporal digital or poetry in a book in a closed drawer, an object that has a real presence creates a permanent tangible statement and acts on us in real time.

He admires Käthe Kollwitz, Goya, Munch, Bonnard who he describes as a poet with color. 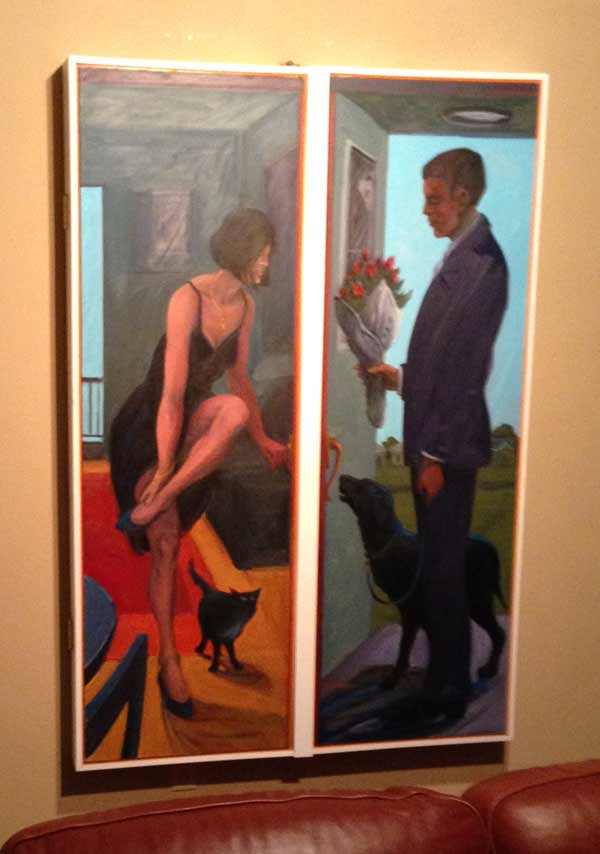 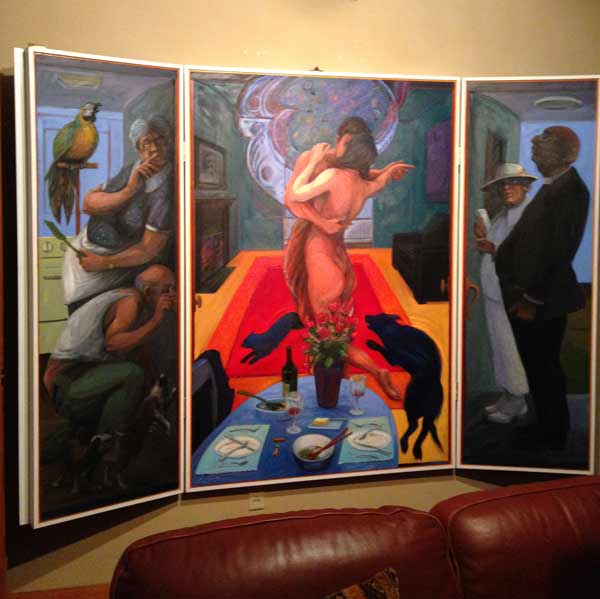 This colorful triptych unfolded in the living room. 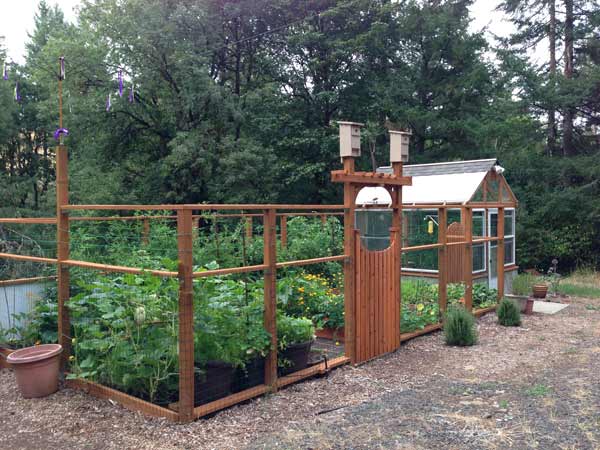 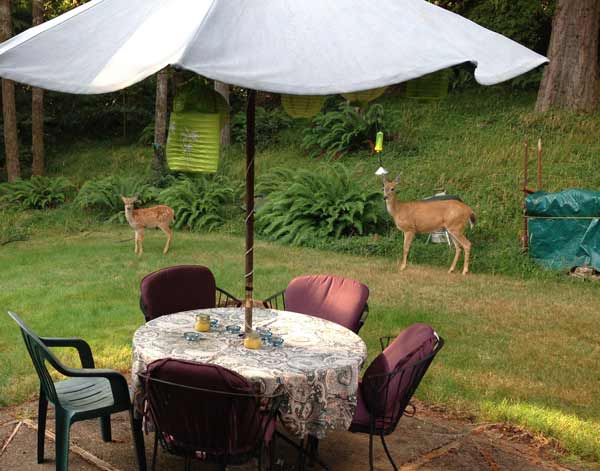 The next morning, the sun shone into the little morning nook and tiny deer gathered at the back door for their daily feed. Clint cooked us a big fry up for our drive north to Portland while I caught up with my notes. 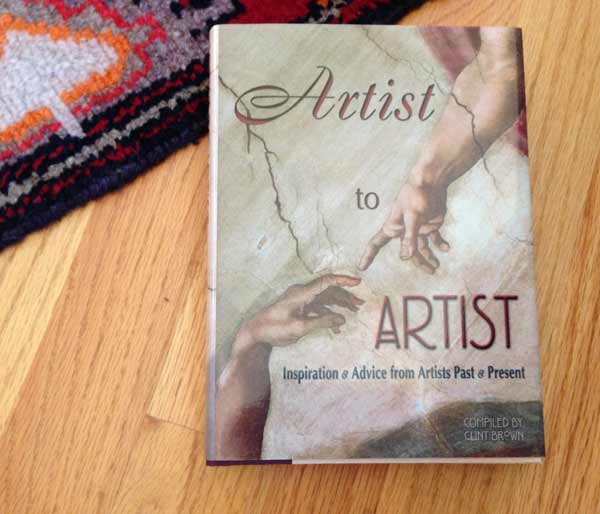 Thanks Clint and Cheryl for the nice vista and Clint's Artist to Artist book of quotes which will no doubt work their way onto the figurative artist directory. Now we're off to visit Sara Swink and Kicki Masthem, figurative ceramic sculpture artists, on our drive up to Portland.
Visit Clint Brown's website.