We arrived Friday afternoon in London by Easy Jet from Nice and had severe sticker shock when we discovered that train travel at this time of day was peak time and very expensive. Poop! We were rushing to buy tickets north to Stoke On Trent and the clerk very kindly suggested that Dennis buy a senior’s pass and save about £80. Grabbed our tickets and hopped on the train north for a few hours. We’ll have to put some research into how to avoid this problem again. We could have saved money by hanging around in London for a few hours and arriving up north later in the evening so there are ways to save money but sometimes they’re just not that convenient. As it was, it took twelve hours door to door from Nice to Leek and we really didn’t want to drag that out more this time but we’ll be more informed for next time.

Our friend Jean picked us up in Stoke and hauled us off to stay with the family in Leek for a couple of nights. We stopped in a busy pub on the way home to have a drink with some old friends.

When we got home, lucky us, we got to wrestle over who got to sleep on the top bunk of bunk beds! I got the top bunk and happily, the bunks were much more comfortable than you might imagine. The kids are growing up, 9 and 17 now and family life was more settled down than it sometimes has been when having house guests sometimes get things just too wound up. I had my butt whipped at card game UNO by 9 year old Alistair, way to go buddy!

Leek is in the Peak Park District, a very lovely pastoral region with rolling hills, dry stacked stone walls giving the green fields structure and shape and containing the many sheep.

On Saturday, we rambled over the hills and dales to Wirksworth for the grand opening of a friend’s flower shop. Very picturesque area that we had never been to before. We are planning to spend much more time just noodling around this area on our next trip to Europe rather than spreading ourselves out over several countries and counties. We saw snow in the fields and even drove through some high snow drifts but happily most of their heavy recent snow has melted.

Caught this exquisite working steam engine with a lovely young fireman with nice black coal smut on his nose. What a grand day he was having, a big adventure he will remember!

We managed to fit in three very typical British dinners in our short visit here; fish ‘n chips from a good local chippie, a tasty Indian take-away and a fabulous roast beef cooked by a friend who invited us for a delicious Sunday lunch in Nantwich. She loves to cook and they needed to christen their brand new three week old kitchen so we were only too happy to oblige! She and Jean had come over to visit us just after the Vancouver Olympics and was very nicely returning the hospitality. Their three bonnie laying hens paraded around as their spaniel dogs looked on. They are busy transforming some rather dilapidated small barns into what I’m sure will be lovely holiday rentals units. With their classy handling, I’m sure they will be wonderful… maybe we’ll get to stay in them on our next trip over… whenever that is.

After three quick nights here, we headed back down to London for two nights in the Brick Lane area of East London at a nice Airbnb place.

This one was a room with an ensuite bathroom in a private home just off Brick Lane, complete with very cute friendly little black dog Hendricks. Of course London is quite expensive and this one cost somewhere around $100 per night(not quite sure) which is still a good rate for London prices.

The neighborhood is very eclectic and is becoming quite the hub for creative types, high tech, Silicon Valley types and advertising agencies, etc. We walked into a couple of large ad agencies just to take a look but were politely told it was not a public place or a gallery as it appeared to be. Loads of great vintage shops and bulging with interesting restaurants at every price point.

Found a gutsy little art collective Cult Mountain just 6 weeks old bulging with unusual finds. I let my Facebook friend Anna Kompaniets know about it as I think her funky wearable art and jewellery would fit right in.

Some of their featured artists were:

Met this wonderful costumed creature on the Tube who says she always dresses like this and sews her fabulous outfits from vintage Vogue sewing patterns. We exchanged addresses and maybe I will go and photograph her in her regalia next time I’m in the UK.

On my one clear day in London, we had a good bang up full English breakfast in a nice local greasy spoon in Bethnal Green then zipped down to Trafalgar Square by Tube. It was a couple of days before Margaret Thatcher’s funeral and I was hoping for no big disruptions as Trafalgar Square plays host to many big showdowns. No, it was all peaceful and I spent as much energy and time as I could muster soaking up about half of the National Gallery. No cameras are allowed and this actually made for much less distraction. The museum was fairly full with many school groups and many other art tourists but it was only the final room with the Van Goghs that was too crowded to get close to art in so I gave that one a miss.

The list of names that bring me to my knees there includes Joshua Reynolds, Gainsborough, Sargent, Bronzino, Van Dyck, Turner… and the wondrous horse Whistlejacket by Henry Stubbs. What a magnificent beast! Great animal portraiture is really as compelling as human portraiture when it’s approached seriously.

After fortifying myself with a nice little soup and the ubiquitous British tea, I continued on the National Portrait Gallery even though I didn’t think I would have the strength to take that in too. It’s just not possible to pick a favorite here! Starting from the top floor and working the way down chronologically, we are treated to stunning Holbeins which have an unbelievable sparkle and clarity even after nearly 600 years! Down the floors we work up to the present and find current celebrities captured in so many styles and mediums.

It feeds my soul to breath the same air as these great artworks. Many are just behind a small velvet rope but the viewer can really get up close and personal with most pieces and really see the brushstrokes and surface textures. There are guards in every room keeping everyone in line.

At one point I sat down on a big bench and went through my iPhone photo album of my paintings. It’s very daunting but also so over-stimulating for artists to visit art treasures they admire. Even just thinking about them now makes my pulse soar and adrenaline rush. If you feel you must aspire to the level which surrounds you in a major museum, it might be enough to make one almost fold up shop and give up. I looked through my album and thought, no, I’m okay, I’m on a track to something of my own making and it’s worth continuing on this path. It’s a voyage of discovery and self expression and even I have never seen what will next come out of my studio! I can always hardly wait to create my next piece which I hope will always be even better than my last one. Although I do take my artwork seriously, I am very fortunate not to have to make my entire living at it, something that is very difficult to do for many so I can take my time and take some chances and know we won’t be starving.

I dragged my art drenched carcass off and refuelled with a small chocolate bar, I wandered up towards Covent Garden, a place we used to spend lots of time in when we lived in London many years ago. Some of the same restaurants were there including Porters with their original British meat pies and Tuttons who made a fabulous dish of profiteroles. The sun had come out and the street performers were in full swing. Several of the little boutiques in the covered market itself were empty and for lease but in the main, it seemed to be quite bustling.

I finally pulled the plug on my wandering around 7 pm and headed for home, walking from Liverpool Street Station through Spitalfields Market home to Brick Lane. Dennis had explored the area only on foot and we compared notes over a drink in the pub.

As Samuel Johnson said in 1777, “Why, Sir, you find no man, at all intellectual, who is willing to leave London. No, Sir, when a man is tired of London, he is tired of life; for there is in London all that life can afford.”

London is my favorite city in the world, so full of interest and excitement, fashion, style, design, art and craft, architecture and life and the whole new groundswell of food! From being the food embarrassment of Europe and perhaps the world about twenty years ago, it has now rushed to the forefront and become a major player on the world food stage.

After a glorious five weeks of travel and adventure, we headed home over the glistening icy Spring break up of Arctic ice. Thanks to our great friends Doug and Mary who house sat for us! Until the next time the travel bug hits, this is your travel blogger signing out. I hope you enjoyed the armchair travels with words and pictures. Drop me a line if you’re a real human and not a robot. Now I just need to get over the jet lag of an 8 hour time difference, ugh…

(Sorry, photographs from this post have become lost in blog upgrade some time back, tried to replace a few…) 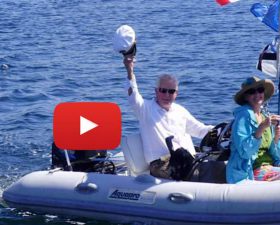 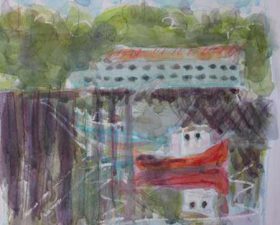 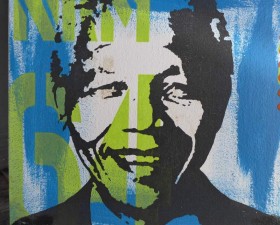