The night before we flew to Las Vegas, I did an evening of life drawing in Vancouver.Dr. Sketchy was great with a gorgeous red headed Little Red Riding Hood giving us good poses from her precarious perch on the bar. Her white stockings shone sharply with well-placed spotlights. She wore fabulous white and black patent leather spectator shoes with ultra high heels for her first shift then pulled a subtle costume change in a performance to “Hey There Little Red Riding Hood, you sure are looking good” song and appeared in pretty red bra, matching panties and red ballet shoes in second act. She was a trained ballet dancer and even got up on point during her little imaginary battle with the wolf.

We were about a hundred, packed in hip to hip. My figurative artist site was announced during the break and several people asked for more info. HA! I met a woman, Suzanne Northcott who said she was glad to see that I was a real person after all. I had emailed her an invitation to join and she just hadn’t gotten back to me but will consider it now. Funny.

Vancouver Dr. Sketchy seems to have found a great new home in the Wallflower Modern Diner, 2420 Main Street, just below Broadway. Get there early to get a good seat. Join the Facebook group and get on the mailing list for future events. It’s jolly good fun and good drawing time had by all.  The model was so focused on her good poses that she actually forgot to pull off her bra. She apologized as she came up after her final pose, popped it off to show off her pasties and the show as over.

Good drawing, good fun, hard work and good networking. I’ll be back when I can make time to stay overnight in Vancouver. It’s life drawing but with a burlesque twist, music and drinks of choice. 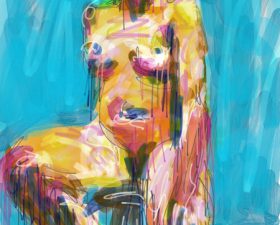 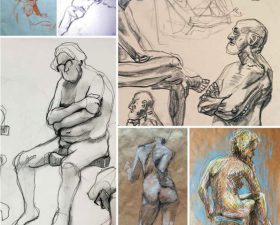 The tiny paint box that i...

Back to sleep Clara, it was all a dream... or was